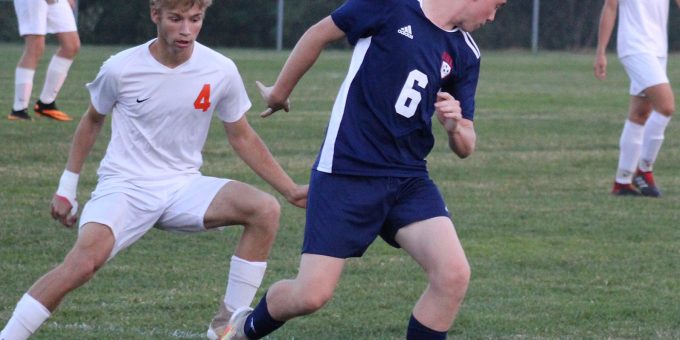 BEDFORD – The shortest distance between two points is a straight line. Columbus East went a wider route for a dominating victory over Bedford North Lawrence.

Taking advantage of its speed on the perimeter, the No.20 Olympians went outside to attack the inside of the net, controlling the second half for a 9-1 win over the Stars on Tuesday night.

East (3-1-4, 2-0-1 in the Hoosier Hills Conference) scored two breakout goals in the final 8 minutes of the first half, then pounded away to pull away with five goals after intermission. Chris Quisenberry and Alejandro Saldivar both scored twice to pace East.

BNL (3-6, 0-3) recorded a gorgeous goal by Josh Anderson midway through the first half, cutting the early East advantage to 2-1, but two goals in an 84-second span late in the half was too much to overcome.

“Our first half was awesome,” BNL coach Logan Jackson said. “The second half didn’t pan out the way we wanted. But credit them. They’re athletic and move the ball well.”

The Olympians, who advanced to the Class 3A semistate last season, took a quick lead as Branson Young ripped a rebound shot home at 37:14, and Logan Cline gather a long pass and raced into the clear for goal at 31:48.

BNL answered with its best sustained moments, culminating in the goal. Gavin Green’s long cross from the far right wing connected with Anderson near the left goal post, and his header was perfect at 24:43.

East finally regained control as Alberto Sanchez scored with 8:34 left in the half, and Quisenberry struck at 7:10.

“We got away from what was successful at the beginning,” East coach Josh Gonsior said. “We got around them and were able to play the middle in. In that middle chuck of time, we were going direct, straight down the middle. Nothing was there. Their defense did a good job of collapsing.

“The last 10 minutes, we went back around and that made the difference.”

East clinched a collective fist and pummeled away in the second half. Quisenberry, who was an All-State selection last year and is already one of the top scorers in school history, scored at 39:15 and assisted on Cline’s second goal at 32:32.

Saldivar got his two goals and Ben Sylvia added another in the final 13 minutes.

“We got momentum and didn’t want to let off the gas,” Gonsior said.

“We were doing a good job of hanging in there,” Jackson said. “The second half was the product of we lost it as far as wanting it. At that point it’s about pride and showing up, trying to stop the bleeding and have a sense of still playing.”