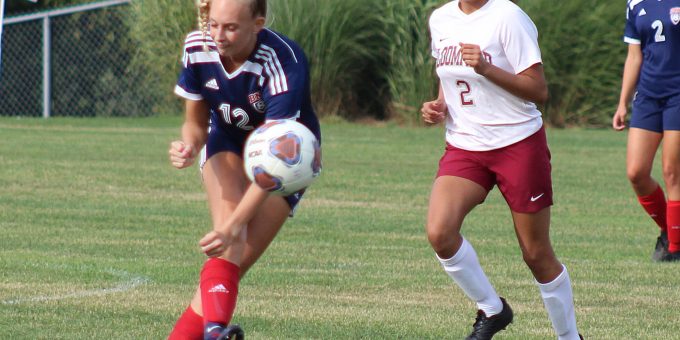 BEDFORD – At last, after some tough losses, Bedford North Lawrence was able to flip the script and dish out the same punishment it had absorbed as a victim of some beatdowns.

The opposite end of the stick feels a whole lot better.

BNL (1-4) honored its seven seniors, and the five that were healthy enough to play also scored. That made it just about perfect.

“I’m proud of the girls,” BNL coach D.J. West said. “It’s always great to get a victory, especially the first victory of the season, on Senior Night.”

BNL , which had been outscored 27-1 in its first four outings, took out some frustrations on the Cardinals, an easy target as a second-year program with only 13 players (and only 11 made the trip) on the roster. Somebody had to pay for the lumps, and Bloomfield was the unfortunate co-signer.

The Stars wasted little time in striking. Heidi Dufore scored off a Marlit Carter pass at 35:00, and the Cardinals aided their own demise with an own goal as Crystal Webb’s shot – about to be smothered by embattled Bloomfield goalie Ileana Horning – deflected off a defenders’s body in front of the net.

Makena Moore made it 3-0 at 31:55, and Katherine West found the net at 25:31 as she dribbled into space and fired from the penalty box. Emily Zhang scored at 13:34, and Moore capped the first half by gathering a long free ball from West and booting home a shot with 11:00 left.

“I knew it would probably be a good night,” West said. “So I told the girls, right from the get-go, let’s have no doubts.”

In the second half, Aly Baer scored off an assist from Alice Baer at 32:15, Hannah Riester came out of her normal goalie spot and got in the scoring column at 28:50, and Carter connected at 25:07.

“It felt really good, especially on Senior Night,” Riester said. “We were all having fun out there.“

BNL was under bench orders to not score again after that. Bloomfield got on the board late with two penalty kicks from Lanie Vestal, who got the free shots after thunderous collisions with defenders. Her first banged off the left post and ricocheted in at 7:17, and her second slammed the cross bar and bounced in with 4:15 remaining. That girl was living right.

“The only negative was playing a little bit down to their level,” West said. “We had worked on some things all week, and we forgot all about that. And I understand. They wanted to get goals. It’s the nature of soccer, the girls want to score.”

And they did, with Moore, West, Riester, Carter and DuFore making it memorable. Seniors Alison Meyer and Claire Nordhoff we’re sidelined by injuries.