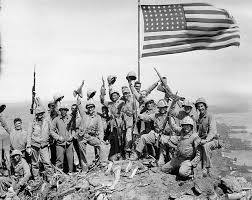 (UNDATED) – Today marks the 75th anniversary of the official end of hostilities in World War II when a delegation from the Empire of Japan came aboard battleship USS Missouri (BB 63) In Tokyo Bay to sign the
an instrument of surrender.

Indiana residents can take great pride in their contributions to the war effort. According to Indiana War Memorial more than 400,000 Hoosiers served in the war with nearly 12,000 of those making the ultimate sacrifice in the defense of freedom.

In addition to that incredible legacy of service, the state of Indiana served as a beacon of hope for all Americans through the exploits of notable ships that bore Hoosier names like battleship USS Indiana (BB 58), cruiser USS Indianapolis (CA 35), two cruisers named USS Vincennes (CA 44) and (CL 64), and many others.

One of those ships, BB-58, had a song written for it by the ship’s band entitled “Here Comes the Indiana.” The music for that song was recently rediscovered by the U.S. Pacific Fleet Band in historical files.

In honor of the end of World War II in the Pacific, they recorded a version of the song and set the tune to a series of photos highlighting the history of Battleship Indiana.

In addition to, the video of “Here Comes the Indiana” there are some other free, public domain content items you may be interested in: