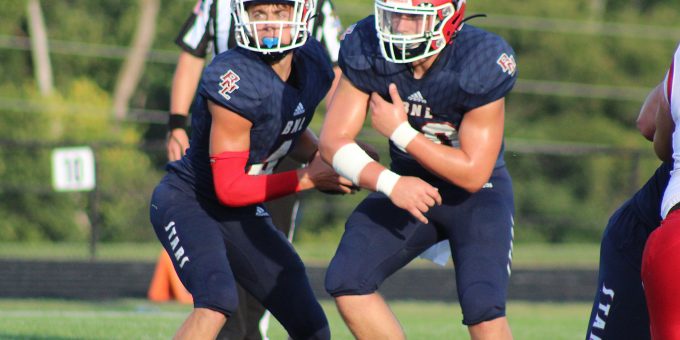 BEDFORD – After some collective breath-holding on the status of its offensive star the last four days, Bedford North Lawrence got the first good news of this tumultuous season.

Junior quarterback Brye Lewis, who has accounted for 77 percent of the total yards and all of the points produced so far, returned to practice. He was held out of the second half last week as a precautionary measure. The pictures of his left knee revealed no structural damage, save for a bone bruise. The sigh of relief created a mighty rushing wind.

So with the slippery, hard-charging signal caller back at the controls of the triple-option, the Stars will now seek a clearer picture in terms of victory. So far, that’s been a little out of focus.

BNL (0-2) will make its Hoosier Hills Conference debut on Friday night when it visits Jennings County (0-2) for its first road test of the campaign. The Panthers will celebrate Senior Night with their home opener on their new turf facility.

While the Lewis presence is vital, BNL will still not be at full strength. The four missing starters, quarantined after possible exposure to the dreaded COVID, will miss a second week. They have exhibited no symptoms, but IHSAA rules mandate four practice sessions after their return.

“These kids are not sick, there’s nothing wrong with them,” Weber said. “There’s no reason not to play, but those are the rules. It’s crazy. What if this is the last game?“

Jennings County coach Justin Sharp echoed a similar sentiment as he juggles his own roster.

“We’re all struggling with that,” Sharp said. “From one day to the next, you don’t know what you’ll have. When players and families don’t know what’s happening, it’s a recipe for confusion. It’s impossible to plan practices and put together a quality product.”

On the field, the teams are similar as well. Jennings relies heavily on quarterback Peyton Hayden, a 6-3, 210-pound masher who has rumbled for 378 yards. He broke runs of 80 and 83 yards while scoring twice in Week 1, and he had 157 yards last week against Brown County.

“He is hard to bring down,” Sharp said. “He doesn’t shy away from contact. He would rather go over you than around you. Running the ball is our strength. That’s what we hang our hat on.“

“He is the one that drives what they do,” Weber said. “We have to be able to stop him to have any chance at all. He’s a good player.”

The same can be said for Lewis, who has totaled 232 rushing yards. The passing game has been suspect (8 of 27 with 3 interceptions), but when he’s in the open field, Lewis is a big-play, breakaway threat.

BNL needs other options. Gavin Scherschel has rushed for 78 yards.

“We’ve had some bright moments,” Weber said. “But ultimately too many mistakes, turnovers, things like that.

“We’ve had a lot of young guys out there, getting their first varsity experience. If we can hang on to the football, eat the clock and come away with points, keep the ball out of their hands, that’s been the game plan all year. But so far, when we have penalties and don’t stay even with the chains, when we get in third-and-long, we get in trouble.”

The Panthers opened with a 52-14 loss to Covenant Christian, with both JC scores coming late while the second half was played with a running clock. Brown County clipped JC 12-7 in Week 2.

Of course, the Stars have suffered equal setbacks: 13-6 to Martinsville in Week 1, 48-0 to Bloomington North last week.

“Somebody is going to get a win, aren’t they,” Weber said. “Both of us are looking at it the same way, a game we can win. We’re excited to play it. Both teams probably feel pretty good about it.”

Last year, the Stars dominated as Dalton Nikirk threw for 226 yards, with Derek Hutchens totaling 187 receiving yards, and the Stars finished with 515 total yards during a 50-21 blowout win.

Last meeting: Last year at BNL, the Stars thumped the Panthers 50-21. Dalton Nikirk threw for 226 yards while Derek Hutchens had 187 yards receiving. Owen Deaton had all three TDs for Jennings.