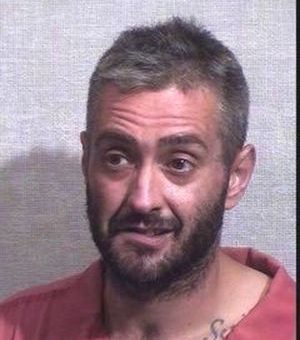 (MEDORA) – A Medora man was arrested on felony charges of intimidation.

According to the probable cause affidavit, Medora Town Marshal Mark Stargell received a report on August 18th from a man who stated Hargett had threatened to kill him over a dispute about firearms.

The man told police he and a friend had been smoking meth when the friend asked him to assist him in moving some firearms.

The friend told the man he had purchased two muzzleloaders and two .22 long rifles from Hargett for $400.

According to police the two men moved and hid the firearms because neither of them was legally allowed to possess the weapons. They soon discovered the weapons had been stolen so they wanted to return them to Hargett.

One of the men was walking home in the 10000 block of West County Road 675 South in Medora in Hargett approached him.

The man said Hargett had a black pistol in his hand and accused him of stealing the firearms and threatened to kill him. Hargett fired one shot into the concrete.

Hargett then again threatened to kill the man if he didn’t leave. The man left the scene and contacted police.

Police went to the scene of the shooting and found a 9mm shell casing 5 feet from a gouge in the pavement.

Police wanted to talk to Hargett at his residence in the 6600 block of South County Road 1100 West in Medora but he had left just before they arrived.

Police went to the man’s home and retrieved one of the allegedly stolen weapons. The man’s girlfriend told police Hargett had been at the home and retrieved the other weapons and took all the meth he could find in the house before leaving.

A warrant was issued for Hargett’s arrest on August 20th and he was arrested Monday night. He is being held in the Jackson County Jail without bond pending an initial hearing.