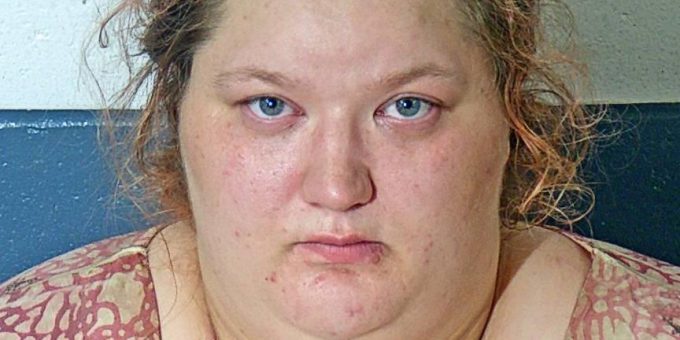 (MITCHELL) – A Solsberry woman was arrested Monday on a warrant on a charge of animal cruelty.

According to a probable cause affidavit, on August 14th the Lawrence County Sheriff’s Department dispatch center received a call reporting a medical problem in the 1490 block of State Road 37 in Mitchell. When officers arrived they noticed several dogs and were concerned about their welfare and requested Animal Control Officer Lola Nicholson to check on the dogs.

Rentschler did bring one puppy to the door for her to see.

The officer left and called the Department of Child Services to do a welfare check on the child she heard inside the home. Nicholson informed officials that she did not believe the living conditions were fit for a child or a dog to live in.

On August 18th Lawrence County deputies were called to the home again after a report of a domestic dispute.

Officers requested DCS to check on the 5-year-old child who was then removed from the home because of the living conditions.

While officers were in the house they found three adult dogs and Officer Nicholson responded back to the home.

Officer Nicholson found an under one-year-old adult male Pitbull named Zeus. The dog was bleeding from the top of his head from confining him in a metal kennel too small for him. The dog was also underweight, but not to an extreme.

Rentschler and 34-year-old Falanya Jo Hensell were told they needed to have the dog looked at by a vet.

Officers found a second white female Pitbull named Harley that was nursing 4 puppies. She too was very aggressive. The dog and her puppies did appear to be healthy and the puppies appeared to have worms based on the size of their bellies.

The owners said the adult female had attacked other dogs several times.

There was a Pomeranian in the house but it was hiding somewhere in the debris and could not be found.

Hensell told police all of the dogs were up to date on their shots including rabies. She advised that their veterinarian is Dr. Medlock at Bedford Veterinarian Clinic on Oolitic Road.

Again officers noted the living conditions in the home. Feces was observed throughout the rooms in addition to trash, clothing, and rotten food stacked in piles inside the home.

Rentschler took Officer Nicholson into the bedroom where the
puppies were. There was so much food, garbage, trash, and clothes on the floor that Officer Nicholson could not walk in the bedroom past the doorway. Nicholson noted it was extremely hot in the house with no ventilation. Officers were also overcome with the smell inside the home and had to step outside to get fresh air before returning back inside.

Officer Nicholson left the home with the intent of coming back to remove the dogs from these conditions.

Nicholson then went and spoke to Dr. Medlock who told her the pitbulls were not up to date on rabies vaccinations. She was also advised they had seen the dogs several times for injuries consistent with dog attacks.

On August 21st at 10 p.m. Lawrence County dispatch received a
call from Hensell. She told police the neighbor’s dog had attacked her Pomeranian and it was bleeding profusely. She advised it was stuck under the bed and wouldn’t come out. Dispatch contacted Officer Nicholson and she told dispatch she would not crawl around on the floor of the house because of the living conditions and to call her when the dog came out from under the bed.

Dispatch called her a short time later and she responded to the house along with another officer.

Rentschler met police at the door and she agreed to surrender custody of
all of the dogs. She signed the paperwork relinquishing all rights of ownership and officers then removed 7 dogs from the property.

Rentschler had to load the dogs into transport cages because they were aggressive.

Rentschler also admitted that she had not told the truth about the Pomeranian’s injuries. She admitted that her pitbulls had attacked it.

The Pomeranian suffered extensive damage to its throat area and had several old wounds in various stages of healing.

The dogs were taken to the White River Humane Society. Since the ownership of the 7 dogs had been relinquished it was decided to euthanize the male Pitbull named Zeus. He could not be controlled or handled and it was a decision made by the Humane Society staff and board members. That decision was based on the safety of the employees and the public. The female Pitbull and her puppies will be placed up for adoption when they
are ready. The Pomeranian is being treated at this time for its injuries.

The information was forwarded to the Lawrence County Prosecutor’s Officer requesting arrested warrants on Hensell and Rentschler.