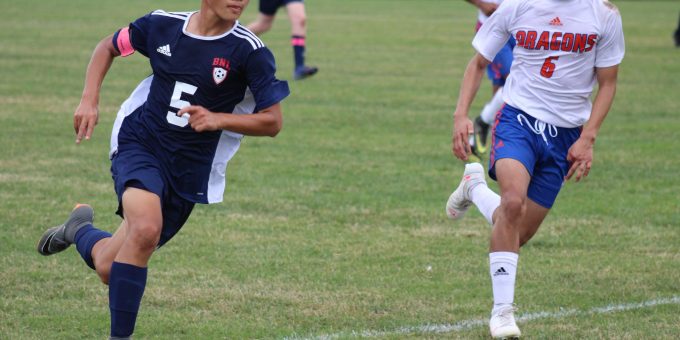 BEDFORD – Dark hair, dark eyes. Dark heart? Danny Cline had the sniper’s focus and a killer finish as Bedford North Lawrence rallied for a victory that could propel a team forward.

Standing alone, one-on-one with the goal keeper, just 12 yards separating them, Cline had the shot. He couldn’t miss. He didn’t miss.

As much as the opening loss, the surrendering of a 3-1 lead in the second half in the 2020 debut against Scottsburg, and the recent lack of offense against quality competition hurt, this triumph was soothing balm for those wounds.

“It’s huge,” BNL coach Logan Jackson said. “That’s a big one. I think our confidence was down. We played three really tough teams (and got outscored 17-0 in that span), so getting one against a decent team is big. We got our mojo back.”

The comeback took only 14 minutes of clock time. Terrell finally pried the goal door open at 24:01, taking a Karter West crossing pass and heading home a shot at the far post.

He followed with another beautiful goal, playing a Cline corner kick with a one-time settling of possession on the left wing and scorching a bullet past the defense for the equalizer at 14:40.

Four minutes later, with BNL applying great pressure, the Dragons were guilty of a hand-ball foul in the penalty box. Cline was selected for the pressure shot, with the outcome in the balance.

“I was just going for power,” he said. “I knew I had to put it in.” Cline’s shot zipped into the upper left corner for the go-ahead goal, and the last 10 minutes were keep-away moments.

Silver Creek (0-4) took control early with a goal by Thavisha Jayawardana, who made a long run to chase down a Jesus Pina pass and loft a perfect shot over BNL goalie Tanner Robbins at 37:36 of the first half.

Pina made it 2-0 with 31:52 left in the second. Jayawardana’s shot from the right side skirted across the goal mouth and found Pina wide open on the far left side for an easy putaway.

“We didn’t look bad, but they got one in one us,” Jackson said. “We fought back and didn’t give up, finally found the back of the night.

“This was a game we had to fight, and we got some goals. That was awesome. We finally broke through. We had great ball movement. Once you get one, they start to fall.“

BNL actually dominated the last 20 minutes of the first half, without anything to show on the scoreboard, and became the aggressor in the final stages of the second half. This time, they were rewarded.

“What gave us the win was we all wanted it,” Cline said. “We realized we put our heads down. We weren’t going to do it again.”

BNL owned a 14-5 advantage in shots. Uly Millis made a tremendous save with 17 minutes left in the first half, leaping to head away a shot in front of the net after Robbins had ventured far from the goal to make a play on the ball.