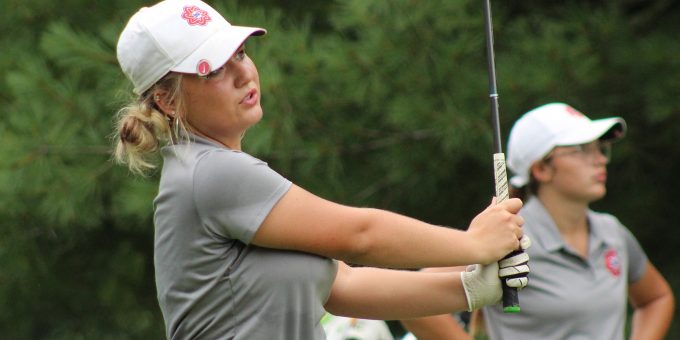 BEDFORD – With Addyson Bailey back in usual and expected form, No.18 Bedford North Lawrence cruised to a victory over Seymour on Tuesday afternoon.

Bailey bounced back from rare struggles with a 1-over 38 on the front nine of Otis Park, powering the Stars to a 170-219 win over the Owls. Bailey had two birdies and avoided any major mistakes.

“I’m definitely happy with what I finished,” Bailey said. “Today gave me a lot of confidence because I struggled the last match. My goal today was to get back to playing some Addy Bailey golf.”

Bailey golf meant birdies on the fourth and fifth holes.

Ashley Chase also birdied the par-4 4th hole en route to a 42. Olivia Sanders, who missed the tournament on Saturday with an illness, came back with a 44 that featured a birdie on No.5. Chloe McFaddin capped the scoring with a 46.

“Addyson is playing well,” BNL coach Aaron Sanders said. “And Ashley has it going in the right direction. Chloe has to learn to eliminate that one big number, and Olivia has to get some confidence back in her putter.”

Lainey Jackson paced the Owls with a 47.

BNL will be idle until hosting Brownstown on Sept. 10.