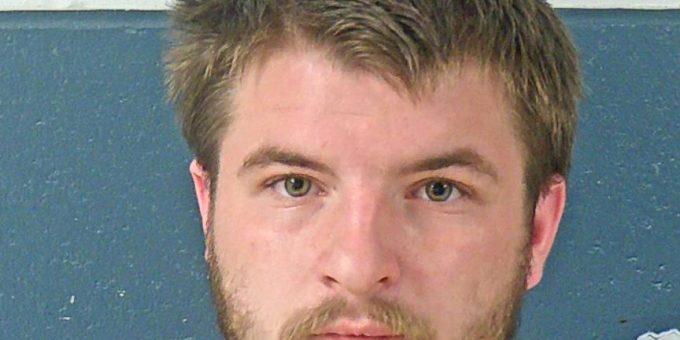 (MITCHELL) – A man was arrested on a warrant after he was in a domestic fight on July 13th at a home in the 80 block of Gun Club Road.

According to a probable cause affidavit, on July 11th at 11:50 p.m. officers were called to the St. Vincent Dunn Hospital emergency room after a report of a woman wanting to file battery charges.

The woman was being treated for back pain and wanted to speak to an officer.

The woman told police her boyfriend Kayne Henderson had pushed her to the ground. The two have an infant daughter together.

The woman told police she and Henderson got into an argument and she would not let Henderson take the baby anywhere without her.

The woman told police Henderson had the baby in his arms when they began arguing.

He then placed the baby on the couch and she went to pick her up because she was crying.

Henderson then pulled her away from the baby, but she did not remember when exactly Henderson pushed her, but he pushed her on the couch with the baby in her arms. She then said she was going to call the police.

Henderson took her phone. She then grabbed the baby, wrapped her in a blanket, and went to the neighbor’s house. The woman says Henderson would not let her have her phone back unless she gave him the baby.

He then threw her phone in a puddle in the driveway.

She grabbed the phone and Henderson immediately took it out of her hand again and threw it on the ground where the two were standing.

The woman left the phone on the ground and walked to the neighbor’s house.

Henderson followed her and got in front of her and on the neighbor’s front porch.

She was still holding the baby when Henderson grabbed her left arm. The neighbor then opened the door and told him to let the woman go and not to touch her like that especially with the baby in her arms.

The woman told Henderson to move out of the way so she could go inside the neighbor’s house. He then threw her phone into the grass and walked back to his house.

Henderson returned a few minutes later after he had calmed down. He came to get the baby so he could feed her, but wanted to take the baby back to his house without the woman.

The woman refused to let Henderson have the baby without her going. She agreed to go with Henderson as long as the neighbor came with them.

Once back at the house the woman told Henderson their relationship was over and she was going to leave him. He told her she was not leaving and began throwing all of her items out of the home.

The woman attempted to push the door open and Henderson pushed and grabbed her by the legs and wrapped his arms around them and threw her to the ground inside the house.

The other male walked into the room and saw the woman on the ground. Henderson told the male he did not touch her.

Henderson’s parents then showed up at the home and helped the woman pick up her belongings in the yard and drove her to her mother’s house in town. Her mother took her to the hospital after complaining about back pain.

The woman was medically cleared and released to go home.

Deputies spoke to the neighbor who witnessed some of the arguments and said Henderson did grab the woman’s arm on his porch. He also saw the woman on the ground at Henderson’s home with Henderson standing over her and the woman hands pinned to the ground. Henderson immediately took his hands off the woman and said he did not hit her.

Police attempted to reach Henderson by phone and by visiting his home but they were unable to make contact.