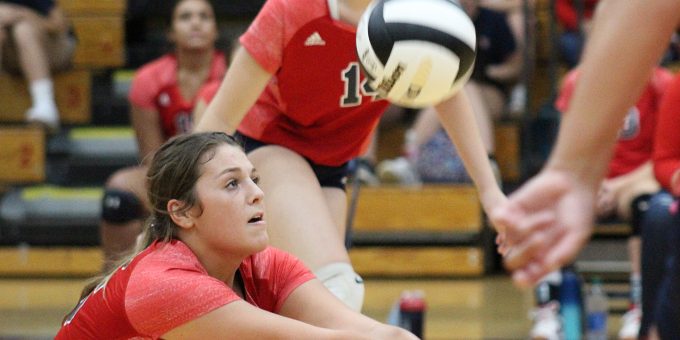 BEDFORD – They used words like joy, energetic, teamwork and friendship to describe their game. Their first-year coach painted their pictures with words like positivity, determination, leadership, humor.

For Bedford North Lawrence seniors Haley Deckard, Sydney Gipson, Myla Bergman and Brynlea Bennett, the love affair with volleyball never waned, even when the sport didn’t show them much in return the last two seasons. Their unwavering passion is being rewarded.

Honoring the upperclassmen with an early celebration night – one of those just-in-case decisions to thwart any possible virus cancellations later on – the Stars swept past White River Valley on Monday night.

With the seniors doing a lot of damage, BNL breezed to a 25-6, 25-11, 25-7 triumph over the clawless Wolverines. The outcome was never in doubt, not after Deckard served the first 14 points of the match and set a dominant tone, as BNL recorded its first sweep in a best-of-5 battle this season. That’s much better than those thrilling but lengthy five-set duels than have become the “new normal.”

This class has suffered through the pains of defeat the last two years. Their current 8-2 record, fresh off their first tournament victory in their high school careers, matches the wins from that previous span. Nobody is enjoying it more.

“Can we triple it?” BNL coach Gabrielle Arthur asked. “That record sets a tone. They almost count the wins faster than I can.”

“To me, it’s honoring all the hard work we’ve put in the last four years,” Bergman said. “It’s getting to express how much we love the game.”

WRV (3-7) didn’t have the firepower to compete, and it didn’t take long to reveal that. Deckard’s remarkable service run was a perfect springboard, and it wasn’t the only long scoring streak. In the second set, after lumbering to an 8-7 lead, Bergman served six straight points. In Set 3, Annie Waggoner took the back line and ripped the Stars to a 13-1 advantage. Bennett served three consecutive aces to make it 17-2, and the seniors took the floor for a final time together to close it out.

Bennett paced the Stars with 7 kills while Waggoner and Carlee Kern added 6 each. Deckard totaled 7 digs, with Bennett and Merritt Callahan totaling 5 each, and Waggoner finished with 15 assists.

The time on the floor was brief, less than an hour. That allowed more for the postgame celebration and the senior moments – the unforgettable ones, not the memory-lapse kind.

“It means a lot, to know everyone loves us and supports us like this,” Bennett said. “I love volleyball and I love my teammates,” Gipson added. And Deckard summed it up: “It’s like a whole other family.”

“They just have great leadership and positivity,” Arthur said. “They were determined to just get going. Each brings something different to the team.”

BNL will now turn a corner to tougher competition, starting with Scottsburg on Tuesday.

“The rest of our season, we’re hitting it head on,” Arthur said. “There’s not on easy team on our schedule from here. It’s difficult not to play to the other team’s level, but the girls did a good job of executing, staying positive and talking.”