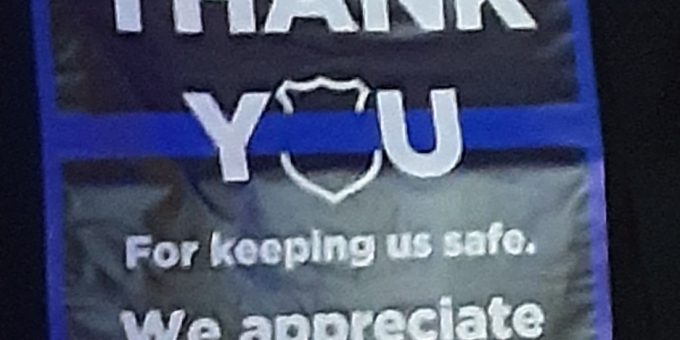 (BEDFORD) – The 1st annual “Back The Blue” event was held Saturday evening at the Boys & Girls Club sponsored by 1340 AM WBIW, 105.5 WQRK, 102.5 Litefm, and local businesses and individuals.

The meal was catered by Golden Corral, and many prizes were given out throughout the evening; a small token of appreciation for the work these officers perform daily.

The private event was held to give a huge “Thank You” and to show appreciation to our local law enforcement officers and what they do every single day to keep the community safe.

Today, law enforcement work is more challenging than ever, and in many parts of the country, their work is scrutinized and criticized.

In keeping the peace they find themselves as counselors, protectors, and perform many other roles as they answer each call.

Law enforcement officers see the worst and the best in people on a daily basis. They respond quickly to emergencies that arise while they are on and off-duty. Their job does not stop when they take off their uniforms.

The professionalism of these highly trained police officers who keep Lawrence County safe has not gone unnoticed.

Tim Thompson of Sherwood Oaks Christian Church Bedford opened the event with prayer asking for protection over the officers.

Bedford Mayor Sam Craig, who has worn the badge for both the Bedford City Police Department and served as the Lawrence County Sheriff, says honoring those that serve is a privilege.

“After suffering from a difficult childhood, I did not like police officers. I got involved with alcohol and drugs as a teen and found myself in the back of a police car. But, thanks to a jail officer who encouraged me and told me that if that was his daughter he would be worried and upset. He encouraged me that it did not have to be this way,” said Machida. That officer was Captain Morgan Lee of the Bedford Police Department.

“I want to thank them for being supportive of me. I owe you my life,” said Machida.

“With all the things going on across the United States, I am often asked how are things going on in Bedford, Indiana. Tonight is an excellent example. We have generous support from the City of Bedford,” said Bedford Police Chief Terry Moore. “We all understand our job is not the same when we first started our career. We wake up every day, put on our uniforms, and do what we do.”

“We are asked to be social workers, apply first aid, and much more,” said Chief Moore.

Later in the evening Deputy Prosecutor Bob Cline and his son Ian said thank you to those at the Lawrence County Sheriff’s Department.

Cline, who treated soldiers who suffered injuries during combat, said it is very different when your own family is involved.

“I want to personally thank the Lawrence County Police officers Williams and Harrison for saving my son’s life that day, applying a tourniquet that saved my son’s life,” Deputy Prosecutor Cline stated.

The night was filled with themed music, especially from the old television shows such as Hawaii Five-0, Cagney & Lacey, and others from the 70s to 90s that inspired many to get involved with law enforcement.

“I have worked under great sheriff’s like Sam Craig and Mike Branham who made sure we had the equipment to do our job,” said Captain Greg Taylor, Lawrence County Sheriff’s Department.

Mitchell Police Chief Mike Hardman talked about how one of his officers, Rob German, said he didn’t deserve the “Life Saver Award” and that he was just doing his job.

“I want to thank the community for showing the support they have given us. Many other places do not have this same kind of support,” said Mitchell Police Chief Mike Hardman.

Lawrence County Prosecutor Sam Arp wanted to thank the officers for their professionalism and dedication.

The Lawrence County Prosecutor’s office handles more than 2,000 cases a year. Every case is first handled by a local police department.

The families of police officers sacrifice a lot – missing birthdays, holidays, and put in many long hours away from their families.

The following sponsors partnered with the “Back The Blue” Event. Specialty food tables were catered from the kitchens of Holly Davis, Carolyn Woolston, and Kellie Temple.