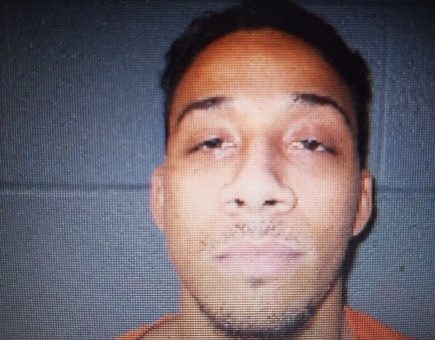 (SPENCER CO.) – On Wednesday a Jasper man was arrested after fleeing from Indiana State Police Jasper Sgt. George Wooten who was attempting to stop the vehicle for speeding.

Trooper Wooten was on patrol in Northern Spencer County when he clocked a Dodge traveling 95 miles per hour on US 231.

Sgt. Wooten attempted to conduct a traffic stop but the vehicle disregarded the emergency lights and sped away.

Again, the vehicle stopped and fled.

Wooten and Dale Police Department Officer Lanman then attempted to stop the vehicle which sped north towards I-64.

Wooten and other officers then pursued the vehicle onto I-64 traveling eastbound. The vehicle then exited the interstate near the 57-mile marker as it entered the eastbound rest park. At the rest park, the driver fled the vehicle and ran southbound into a field.

Sgt. Wooten gave chase and apprehend the driver a short distance from the rest park.

The driver was identified as 24-year-old Isiah Stokes, of Jasper.

Officers learned Stokes was wanted on warrants through Spencer County for a probation violation and in Dubois County for domestic battery.

Stokes was arrested and transported to the Spencer County Jail where he is facing additional local charges of resisting law enforcement in a vehicle, resisting arrest by fleeing on foot, possession of marijuana, and reckless driving.