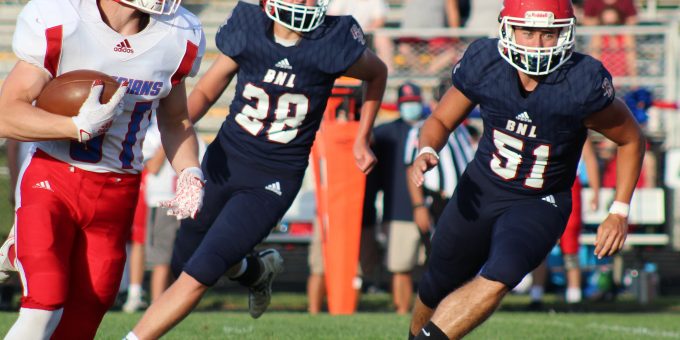 BEDFORD – Talk about your double-hurricane wallops. Three storms are headed toward Bedford North Lawrence for Week 2 of the frenzied, frenetic, hyper-manic 2020 football campaign.

The convergence of virus quarantines, predicted remnants of Hurricane Laura, and Bloomington North’s dangerous offense will trigger a Category 3 warning as the Stars look to rebound from the season-opening loss to Martinsville.

The Stars, already young, will likely start four freshmen Friday night as they face the Cougars (0-1) in a test of survival. With four starters sidelined, BNL has been forced to adopt the next-man-up mentality

“The problem is, it’s not the next man up,” BNL coach Steve Weber said. “It’s the next-next man up. But the kids are working hard. They’ll give it everything they have. We have talent. It’s just a matter of getting them experience.

“It’s going to be a tough night. If we can come out of this, I think we come out better. We’ll be deeper, and then we get guys back. These guys will play a lot of football for us in years to come. They’ve been forced into it a little quicker than we wanted.”

BNL will be short-handed because of two factors. First, sophomore center Jett Jones, who suffered a right knee injury in the second half against Martinsville, will miss approximately four weeks. Three other starters have been sidelined as a COVID precaution for close proximity to a confirmed case.

The expected bad weather, as Laura swirls up from the Gulf Coast, would make a mess of the night. And the Cougars (0-1) could make a mess of BNL’s defense, although that unit held up quite well during the 13-7 setback to the Artesians.

“We competed great, played hard,” Weber said. “We just ran out of steam and made a lot of young mistakes. They played really hard. We surprised a lot of people. They give it all they have. You can’t fault the effort.”

North’s focus will also be its defense. The Cougars were overrun in the second half during a 28-23 loss to Greenwood last week. Greenwood totaled 357 rushing yards, with two backs accounting for 195 and 144, and its offense pounded out 16 of its 23 first downs after intermission.

“In the first half, I thought we played pretty well defensively, got some key stops,” North coach Scott Bless said. “We had a chance, as a team, to take them out of their game plan. And we failed to do that. Then they executed their power run game and chunked the ball down the field.“

North has the capability of scoring in chunks, with quarterback Reece Lozano (7 of 10 for 110 yards and one TD last week), tight end Aaron Steinfeldt (an Indiana University recruit) and receiver Bailen Murphy (destined for Indiana State).

“We know what they can do,” Weber said. “They’re very good. They’re a hard team to defend. Our best bet is to control the ball. I hope we can move the ball on the ground. Chew some clock up. You have to keep their offense off the field.”

BNL could not do that last season. Xavier Trueblood ran for 160 yards and scored four times – including TD runs of 48, 37 and 29 yards – and Lozano was 10 of 14 for 121 yards and two scores. All that came in the first half as North ripped to a 41-7 win (with a running clock in the second half via the mercy rule).

Trueblood graduated, but he’s been replaced by Cody Mikulich (136 yards on 9 carries, featuring a 69-yarder on the first play of the game, against Greenwood).

BNL will have to counter with the option attack of junior quarterback Brye Lewis, who had 102 yards and a TD in Week 1.

“They are a running team, they run it well,” Bless said. “It’s a new challenge. You have to be very disciplined. It’s well designed to keep you on your heels.“

Last meeting: Last year at North, Xavier Trueblood ran for 160 yards and 4 touchdowns as the Cougars roared to a 41-7 victory. The second half was played with a running clock.

Game notes: North opened with a 28-23 loss at Greenwood. The Cougars went 7-3 last season, their first winning record since 2013.