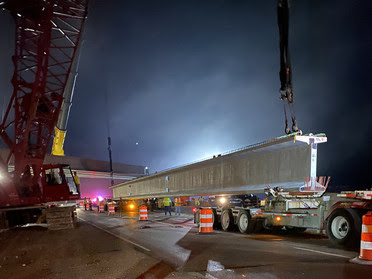 Starting around 7 p.m. on Wednesday and Thursday nights, 20-minute traffic stoppages will allow cranes to lift the large concrete beams into place over the highway. The rolling stops are scheduled to be completed by 6 a.m. each day.

Lane and shoulder closures are expected during the day on Wednesday for crane installation and bridge beam delivery and on Friday for crane removal. The S.R. 37 speed limit is reduced to 45 mph from Martinsville to Waverly Road.

A partial closure of West Morgan Street at S.R. 39 in Martinsville is scheduled for next week. Road crews will be realigning the intersection with the widened S.R. 39.

The westbound Morgan Street turn lane onto S.R. 39 northbound will remain open. All other turn movements at this intersection will be prohibited temporarily, including:

The partial closure is expected to begin on Monday, Aug. 31 and be completed by the end of the week, dependent on weather and other factors. The detour through downtown follows Morton Avenue and Main Street.