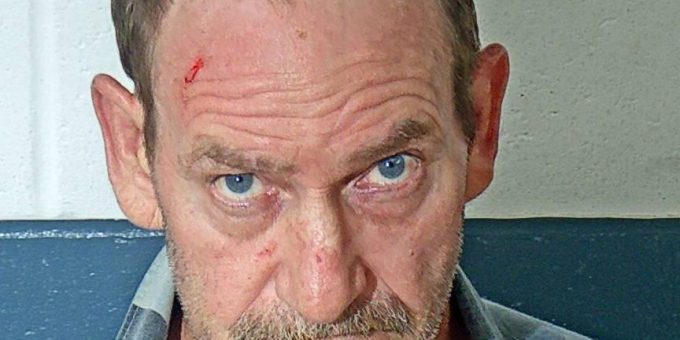 The caller reported the vehicle had been parked in the lot since Thursday at 5 p.m.

When police responded they saw the white vehicle and found 59-year-old Vernon Chastain asleep in the driver’s seat.

The officer woke Chastain, who told him he was tired and decided to pull over to sleep.

As the officer spoke to Chastain, he noticed the odor of raw marijuana coming from inside the vehicle.

The officer asked Chastain to step out of the vehicle.

Chastain was asked if he had any marijuana on him and he told the officer no. When asked where the marijuana was he said he didn’t know.

Chastain stood outside the vehicle with his head down and the officer noticed Chastain had sores on his arms which is common with using meth.

Chastain then asked if he could smoke a cigarette. As Chastain opened the car door the officer noticed a glass smoking device in the driver’s seat.

The officer seized the glass smoking device which had white residue in it. They also seized a partially burnt hand rolled marijuana cigarette that was found in the front driver’s seat.

In the area between the driver and passenger seat was an eyeglasses case. Inside the case were two small ziplock baggies containing a crystal-like substance that tested positive for meth.

Police also located a small amount of marijuana in the front passenger seat in a basket.

Chastain was arrested and his vehicle was towed from the property.