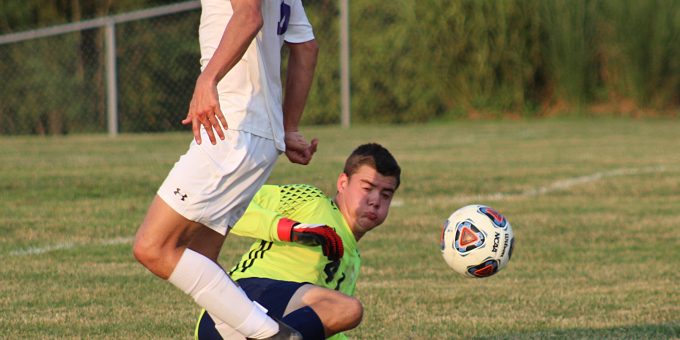 BEDFORD – Bloomington South, quick and elusive, dominated possession like a bully swiping a prize from a timid target. Even the crack NCIS investigative team would have difficulty finding evidence of Bedford North Lawrence footprints on the ball.

The No.13 Panthers pounced early and cruised to a 6-0 victory on Tuesday evening. Andrew Swank and Kamal Yarbouh both scored twice as South (3-1) bounced back from its first loss by brushing aside the Stars (1-3).

Newen Antinao got the Panthers on the board in less than two minutes, and that set the tone as BNL struggled to sustain ball control and mount a counter attack.

“We didn’t get off on the right foot, and it just spiraled down from there,” BNL coach Logan Jackson said. “We have to figure out, against better teams and competition, how to string together more than two passes. That just killed us.

“We abandoned it all together and just tried to go through them. Those are things we’ve worked on and tried to implement, but against competition it falls apart.”

Antinao opened the scoring with a goal off a beautiful crossing pass at 38:08. Swank banged home a swanky goal, gathering a loose ball in the box and ripping the shot home, for a 2-0 lead at 35:28.

The Stars settled into a solid defensive posture before Yarbouh struck twice in 27 seconds, the first from the top of the box at 12:25 and the next at 11:58 on a rebound after a South shot struck a BNL defender.

“We wanted to get back to our style and how we play, which is attacking quickly, setting the pace ourselves instead of letting our opponent dictate how we’re going to play,” South coach Kevin Sparks said. “They responded just how I hoped they would.

“We’re a possession team, a lot of skilled players that know how to play this game very well. Our goal is to move the ball, build as a unit. I like six or seven guys attacking at the same time.”

South scored twice early in the second half as Swank found the net at 37:08, and C.J. Santiago finished off a pepper-shot sequence in front of BNL goalie Tanner Robbins with a goal at 33:39.

BNL could not generate many scoring chances, and the few shots came in the second half after the outcome was secure. South had a 15-3 advantage in shots.

”When you do get a chance, you definitely can’t squander it,” Jackson said. “You have to take advantage of it, and right now we’re struggling to do that. We need to find our scoring and offense groove.”

The Stars will host Bloomington North on Saturday.