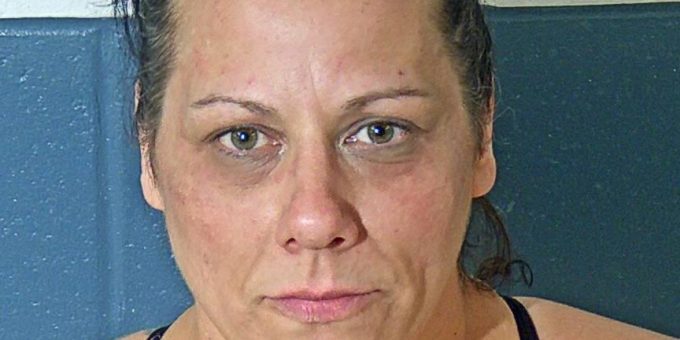 (MITCHELL) – A Mitchell woman was arrested after her vehicle was stopped by a Mitchell Police officer Tuesday.

According to a probable cause affidavit, a Mitchell Police officer was parked at the Marion Township Fire Department when he noticed a black Ford Escape traveling south on State Road 37. The officer observed the driver notice the police vehicle and abruptly brake and continue to have the brake applied well past where the officer was parked.

As the vehicle passed the officer they noticed it did not have a registration plate light.

The officer caught up to the vehicle which was stopped at a red light at State Road 27 and Main Street. Once the light turned green the officer activated his lights and attempted to stop the vehicle but the driver began to accelerate.

The vehicle continued to travel for approximately 300 to 400 yards before abruptly pulling to the side of the road.

When the officer approached the vehicle Walther was rummaging through various items on the passenger seat. While doing so, the driver disclosed a silver and black pistol hidden under the items.

The officer told Walther to immediately remove her hands from the seat.

The officer then asked for Walther’s driver’s license. She told the officer she didn’t have a valid license.

The officer said Walther appeared very nervous and her hands were trembling.

She then began to rummage through the items on the seat again and put her hands on the pistol. The officer then removed the 9mm handgun from the vehicle.

Walther continued to move items around on the seat and asked the officer numerous times not to tow her vehicle.

The officer then got K-9 Jack to search the vehicle. That is when Walther asked if she could get her cigarettes out of the vehicle. She was told no. She then asked to call her mother because she wanted to let her know she was going to jail.

K-9 Jack indicated there was possible drugs in the vehicle.

Officers also seized a taser and large knife in the passenger seat.