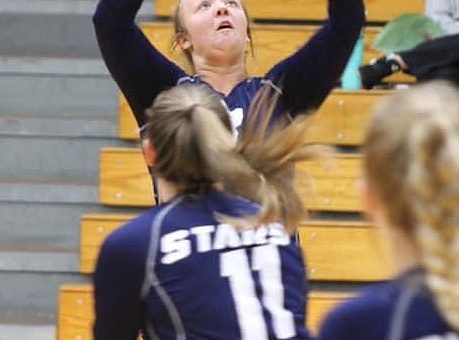 BLOOMFIELD – Fresh from a draining five-set victory only 24 hours earlier, Bedford North Lawrence ran out of energy and suffered a four-set setback during high school volleyball action at Bloomfield on Tuesday night.

”We really just seemed tired,” BNL coach Gabrielle Arthur said. “We played a little lackadaisical. Everyone struggled to find their own momentum.”

Haley Deckard had 12 kills and 11 digs, Carlee Kern totaled 9 kills, 12 digs and 6 blocks, and Annie Waggoner handed out 17 assists for the Stars.

“Haley played well, but we couldn’t find consistency in other areas of the court to make a run that really forced them into anything uncomfortable,” Arthur said. “Bloomfield has extremely consistent passing and defense, and we got lazy with ours.

“Another match where we matched up extremely well with our opponent, but our opponents are only getting better and better. We’ll do some fine-tuning. Occasional bumps in the road make success taste sweeter.”