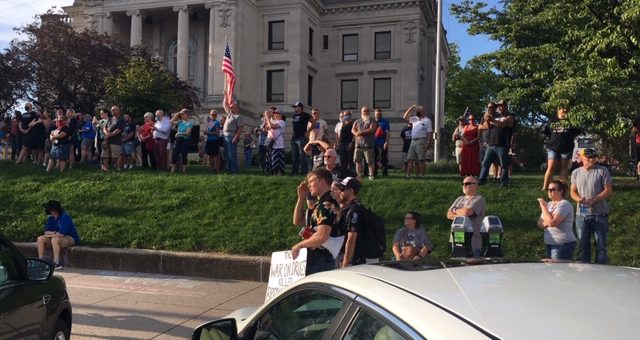 (BLOOMINGTON) – Protesters clashed Saturday night outside of the Monroe County Courthouse during a Red, White, and Blue Rally and Black Lives Matter protests.

At least three people suffered injuries to the head and face.

One person was transported by ambulance to a local hospital for treatment. Others were evaluated and treated for minor injuries at the scene.

Around 6 p.m. more than 200 protesters showed up near the Monroe County Courthouse to show their support for law enforcement.

Around 6:30 p.m., protesters in vehicles moved onto Kirkwood Avenue in front of the courthouse creating a road block.

Just after 7 p.m., a group of about ten Black Lives Matter protesters crossed Walnut Street chanting and holding signs and moved in front of the courthouse.

This caused a verbal and physical confrontation among some of the protestors from both groups.

Bloomington Police then arrived on the scene after receiving complaints of the confrontation. The protest ended around 8:40 p.m. with everyone leaving the scene.