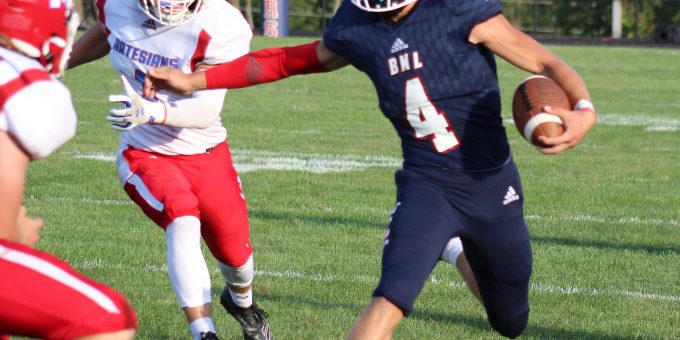 BEDFORD – The pains of inexperience, the mistakes of exuberant youth, caused a lot of harm. Friendly fire, most of it. Bedford North Lawrence discovered it could dodge and deflect the attack of the opponent, but the self-inflicted wounds were great.

Turnovers, forcing the issue for something huge rather than taking the smaller advance, and penalties are the trademark of a young team. Veterans limit those. The Stars earned valuable experience in the season opener on Friday night, but it cost them a victory.

Martinsville’s Larry Bland intercepted a pass in the end zone midway through the fourth quarter, and Adam Field ended BNL’s final drive with another pick as the Artesians escaped with a tough 13-6 win. Tyler Cox ran for 142 yards and scored twice as Martinsville beat BNL for the 18th time in the 21-game series.

BNL’s dynamic triple-option attack, which cruised smoothly for a touchdown on the opening drive, sputtered and coughed the rest of the night. Brye Lewis was often in the spotlight of highlight plays, but the sustainability was lacking. Lewis finished with 102 rushing yards and the lone score.

The bottom-line difference? Three turnovers, 11 penalties. Those weren’t shots to the feet, those were blows to the head.

“The inexperience, the youth,” BNL coach Steve Weber said. “What happens is they start pushing, and don’t know how to handle it. Your first instinct is to push harder, and sometimes that doesn’t work.

“I’m proud of them. I’m not happy, but I’m proud. They played hard, they didn’t quit. I saw a lot of guys stepping up and playing ball. We got tired and started making mistakes. Penalties killed us.”

The start was scintillating. Lewis, in his varsity debut, engineered an 84-yard drive, featuring his runs of 12 and 14 yards, plus a 14-yard pass connection with Jesse Brock. From the 30, he drifted back to pass, scrambled right and took off, dashing home with 5:46 left in the first quarter. Wow, that was easy.

Nothing after that was.

“Our guys didn’t panic,” Martinsville coach Brian Dugger said. “It really was assignment football. Bedford does really good stuff on offense with the triple option, they make you play perfect every single play. But we didn’t panic, we rallied. Hats off to our defense.”

Martinsville, locked in a field position battle it finally won, came back with its first drive of the second quarter. With a short field, Cox cracked away for 18 yards to ignite it, and he scored from the six for a 7-6 lead with 9:05 left in the half.

The scoreboard didn’t change until late in the third. Martinsville quarterback Tyrus Martin hit Garrett Skaggs with a quick pass, and Skaggs raced down the right sideline for 50 yards before stepping out. Two plays later, Cox blasted home from the 12 for the 13-6 lead.

BNL had two chances to respond. The first was the best as Gavin Scherschel did some muscle work up the middle, and Lewis threw a bullet strike to Dylan Nikirk on 4th down in the red zone. Nikirk absorbed a huge hit but hung on at the 16. Three plays later, Lewis looked for Ben Cosner in the end zone. Cosner broke toward the corner, Lewis threw the pass inside, and Bland was the man on the spot with 9:16 left.

The final drive, set up when Kaedyn Bennett recovered a backward lateral near midfield, ended in more agony as Lewis fired ball into traffic that Field pocketed. The Artesians ran out the final 3:34.

Cox was a workhorse, getting his yards on 31 carries. Martin was 7 of 16 for 143 yards but was intercepted twice (Collin Whittaker and Brock). Skaggs had 3 catches for 92 yards.

“We were relying heavy on the big offensive line and Tyler Cox,” Dugger said. “Outstanding effort from those guys. We’d like more points on the board, but we’re happy with the outcome.”

Dugger, a former assistant at Southport, was a winner in his first game as a head coach. “It’s pretty cool,” he admitted. “A little stressful.”

BNL, a little limited with its playbook because of missed practice time and stressing the basics with so many new starters, couldn’t adjust on the fly. That usually doesn’t work.

“Our answer plays weren’t in,” Weber said. “If the defense does one thing, you have an answer. You have to practice it or it doesn’t work. I’m definitely encouraged. We have some good things happening.”

BNL is scheduled to host Bloomington North in Week 2.