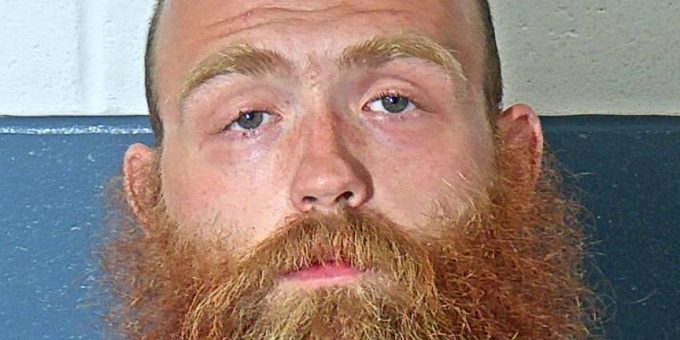 (MITCHELL) – A Mitchell man was arrested Thursday afternoon after police say he injured a woman during a domestic fight in the 110 block of East Grissom Avenue.

According to a probable cause affidavit, on Thursday at 1:04 p.m. officers were called to the home on East Grissom Avenue after a report of a physical domestic fight. When police arrived they found a female with her right eye swollen shut.

The woman told police Hopkins had hit her.

The woman was crying and visibly shaking. She told police that she had been outside smoking when Hopkins woke and came outside and was yelling at her and calling her names. He then got in her face and spit.

The woman got mad and told him to “**** off.” That is when Hopkins took her drink and threw it. She started up the porch stairs and he hit her in the face two times. Once inside the home he hit her more times and forced her to the ground and placed a pillow over her face saying he was going to kill her.

The woman was able to escape and was screaming for help.

He put his hands over her nose and mouth and forced her back to the ground while hitting her and kneeing her in the ribs and face. He then dragged her to the bathroom. She escaped out a back door and ran outside.

Hopkins forced her back into the house and was choking her. She fought back trying to grab his genitals. Once he got her in the kitchen he pulled out a knife and put it to her throat telling her to stop screaming.

He then took her into the bathroom and tried to administer first aid to her eye.

During this time the woman said Hopkins’ moods would swing from calm to irate.

After an hour she was able to escape and run to a neighbor’s and call 911.

Hopkins was arrested. He refused to speak to officers saying “I plead the 5th”.

While transporting Hopkins to jail he asked the officer to make arrangements for his children to be picked up from school and he stated “I don’t want them to suffer for my bad decisions”. He then said he wished to obtain mental health help, but he has been scared saying he regularly hears voices.

Hopkins was remanded in the Lawrence County Security Center without further incident.

The woman was transported to IU Health Paoli Hospital for treatment.

Police also found the knife and pillow used to attempt to smother the woman. The pillowcase had blood on it.