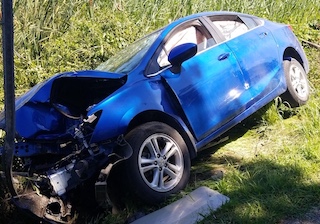 According to police, 33-year-old Heather Reeves and her passenger, Aaron Evans, were driving northbound on County Road 700 East when the crash happened.

Reeves left the road and crashed into a bridge abutment. The driver of the truck didn’t stop.

Police are asking for any information on a white pickup truck with fresh passenger-side damage. There may be blue paint from Reeves’ car on the truck.