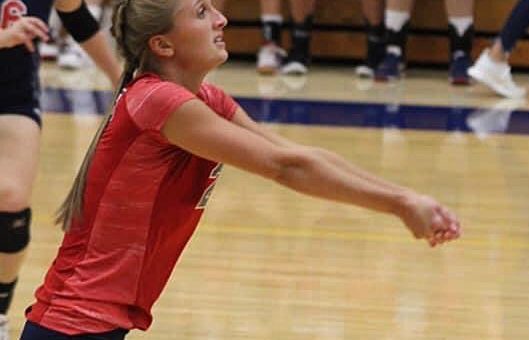 After opening with the impressive win over county rival Mitchell, the Stars added another shot of confidence with the comeback victory.

The Eagles were threatening to run the Stars out of the gym after the second set.

“We got in that huddle and asked what just happened,” Arthur said. “We’re not a team that loses by 14. That’s just not acceptable.

“We might have been on cruise after beating Mitchell, and Brown County was very similar to us. We weren’t able to execute and it got frustrating. We had to change that around. Carlee Kern came alive, our hitters woke up.

“Luckily we’re a team that we don’t have to coach hard work and attitude. They were ready to get back out there. I said we can roll over or play five games and win. That’s exactly what they did.”

Kern and Haley Deckard played huge roles in the rally.

“That’s one of the hardest part of volleyball,” Arthur said “When you’ve got that momentum in your favor, it’s a game changer. Haley Deckard brings so much of that. She’s outstanding as a player, but she brings so much energy and positivity. It’s crucial to find that energy. She brought a lot of that.”