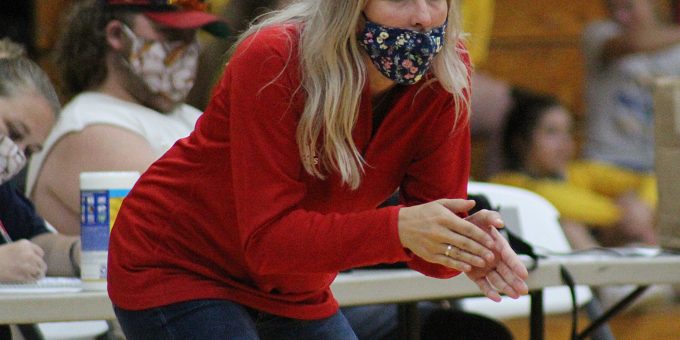 BEDFORD – Behind that flowery mask, that mandatory piece of protection in this new world, with only those eyes sparkling, Gabrielle Arthur’s grin stretched from ear loop to ear loop.

Those face shields cover a lot, but hers could not mask Arthur’s glee as Bedford North Lawrence won its season opener. Nothing could be sweeter.

After dropping the first set of the 2020 campaign, the Stars scrambled back to stop Mitchell 19-25, 25-22, 25-20, 25-21 on Tuesday night as Arthur – facing her former high school coach and many friends on the opposite sideline – guided her alma mater to a dramatic victory in her coaching debut. Not bad, kid. Not bad at all.

With Haley Deckard winning most wars at the net, with a swarming, hustling defense stoked by Myla Bergman on the back row, with scorching serves that probed and punished, the Stars pounded down the Bluejackets (3-2). They took control midway through the second set, went on a scoring rampage in the fourth, and won all the key points.

No mask could hide the supreme satisfaction of victory.

“I believed so hard the girls were going to win,” Arthur said. “I wanted them to feel what it’s like to beat a good team.To start a season off like that and have that momentum moving forward.”

Mitchell, with former BNL boss Scott Saunders at the helm, broke out to a 7-0 lead in the opening set and cruised from there. The Stars didn’t look quite ready for the moment. But Saunders could sense trouble.

“Even in the first set, we weren’t playing to win the war,” he said. “We scored off their errors, we weren’t generating points through our offense or defense.”

The first critical juncture came late in Set 2. Deadlocked at 21-21, BNL raced to the finish line as Deckard dropped down a tip point, Annie Waggoner scored with a service ace, and Waggoner followed with a push into the deep right corner to end a long rally.

In the crucial set 3, which is almost always a determining factor in the outcome, Bergman’s spectacular defensive saves sparked a BNL run as Carlee Kern hammered down two kills and blocked down another for a 22-15 lead. Sydney Gipson added a kill, and back-to-back Mitchell errors ended the set.

In the fourth set, after the Jackets scored 7 consecutive points for a 7-3 lead, the Stars roared away with another long scoring streak. With Deckard on the service line, with Bergman making another daring save, with Waggoner adding a tip kill, BNL rumbled to a 14-8 advantage. Mitchell never got closer than three after that.

With BNL did not have statistics immediately available, one thing was clear. Kern is the hammer in the middle, yet Deckard was just as effective with her assortment of soft stuff. Her ability to find open floor with pushes, dinks and placement makes her a weapon.

“We’ve focused a lot on serving and defense,” Arthur said. “If we can serve, we can win games, and if we can hustle on defense, we can win. Our blocking and hitting was awesome, but what won us that game was hustle. They have really good hitters, but we took into account that no ball was going to hit the floor without all of us going at it.

“We value seeing the court and placing the ball where there is no body. If we can place them where they need to be, a point is a point.”

“They did a good job,” he said. “They beat us in every phase. They outcoached us, outhustled us, outserved us. They definitely outhit us because we made way too many attack errors.”