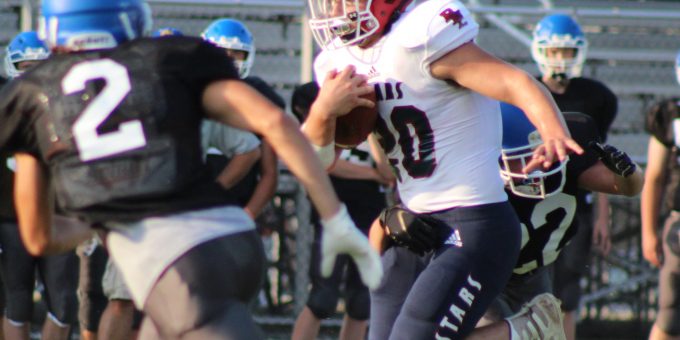 BEDFORD – After months of straining to reach the first finish line, new Martinsville coach Brian Dugger – and most Indiana football teams, honestly – is close enough to lunge, stretch and lean toward the 2020 season opener.

Tired of looking over his shoulder, still dreading the possible phone call to end it all, Dugger will make his debut on Friday night when the Artesians visit Bedford North Lawrence for the most anxious, anticipated, apprehensive start in state history.

Welcome to the COVID Bowl, Week 1.

With the constant specter of a virus shutdown still hanging over the turf like thick fog on an autumn morning, many thought this day might not come. After all, the sacred boys basketball tournament and spring sports were wiped out. Yet, unless the worst case happens, the season will begin. Thank goodness.

Rather than worry about potential disaster, it’s time to talk football. And there’s plenty to discuss as the Artesians unveil a new coach while the Stars rebuild their new-faces offense and retool a riddled defense from a year ago.

For BNL, the storyline is youth and inexperience. The offensive line, already battered by injury and illness, will include a freshman and sophomore. Junior quarterback Brye Lewis, a star in the scrimmage, will take his first snap under heavy fire. Many questions need answered.

“Our worry is on us and what we have to improve,” BNL coach Steve Weber said as he prepares to start his eighth season with the program. “We had a good scrimmage, but our biggest concern now is matching up athletically with them. We’re a little younger, probably outsized. Man for man, how will that look? There’s a whole bunch of key positions out there.”

Lewis was superb against Mitchell in the scripted workout, accounting for six touchdowns. He’ll likely be working with senior Gavin Scherschel in the backfield, but the spotlight will be on a front line that will include sophomore center Jett Jones, junior Kaleb Garner and senior Austin Messmore at guards, plus freshman Kline Woodward and junior Nick Mansker at tackles.

“Right in the fire,” Weber said.

For Martinsville, the focus is a new system as Dugger takes over after serving as an assistant at Southport for 13 years, the last seven as offensive coordinator. Much of what the Artesians do now will look similar in style and substance to recent seasons as Dugger will run a spread attack.

“It’s been pretty smooth,” Dugger said of the transition. “I felt I was pretty prepared for this. Obviously there is a lot more that comes with it, some of the off-the-field stuff and then throw in the COVID stuff. It’s a whole new game.

“What we’re all about is doing things at an elite level. We talk about doing things right all the time, doing things in a first-class manner on and off the field. We want to be elite in everything we do.”

Martinsville did everything right last season against the Stars. Senior quarterback Xavier Tunitis threw for 196 yards and two touchdowns, while running back Tyler Cox broke off a 77-yard score and finished with 148 yards on 10 carries. Those numbers are especially impressive considering the bulk of the second half was played with a running clock after a blocked punt for a score gave the Artesians a lead of greater than 35 points.

The Artesians will feature a new quarterback in senior Tyrus Martin, but their main question will be defense. Last season, Martinsville allowed only 13 points while topping BNL and Bloomington South the first two weeks. Then injuries dismantled the linebacking corps and secondary. After that, Martinsville allowed a whopping 42.5 points per game while stumbling to 4-7 overall.

“Any time you face a team that runs the triple option, you’re worried about assignment football,” Dugger said. “That’s the top priority. They have some guys that can run and guys that will hit you. They will cause us some issues.”

BNL’s other issue will be ball security. Last season the Stars had three turnovers against Martinsville’s aggressive 4-4 scheme, and last week BNL put the ball on the ground multiple times in the scrimmage with the Bluejackets.

Now wasn’t that wonderful to think about pure football? Of course, everyone still has the virus and its implications, with all the safety protocols and rules, on their minds.

“I’m excited, but I’m also cautiously optimistic,” Dugger said. “I know, any second, the rug could be pulled out. The excitement is boiling over and we’re ready to go, you can see it in the kids, and you just hope they get the opportunity to play.

”As coaches, we always use this ‘play like it’s your last play ever’ speech. And we’re living that right now. This literally could be the last practice, the last game. So approach it like that. You just hope that phone call doesn’t come. We just want to play some football.”

Last meeting: Last year at Martinsville, Xavier Tunitis threw for two TDs and Tyler Cox ran for two as the Artesians rolled to a 40-7 victory. BNL was guilty of three turnovers, and Martinsville blocked a punt. The final 21:35 of the second half was played with a running clock.

Game notes: BNL’s last win in the series came in 1992. Dugger was an assistant coach at Southport for 13 seasons.