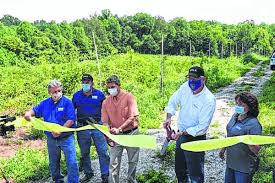 Ravinia State Forest, near Paragon, encompasses 1,500 acres of wooded rolling hills, valleys. and restored cropland. The other is Mountain Tea State Forest which consists of more than 1,150 acres east of Nashville.

More than 700 acres of the Mountain Tea State Forest, formerly managed by The Nature Conservancy, was acquired by the state in 2013 with the assistance of the U.S. Forest Service through the Forest Legacy Program. Additional acreage was acquired in 2009 through purchases from private land owners.

Ravinia State Forest was acquired through the Indiana Department of Transportation’s Crossroads 2000 Fund.

There are now 15 officially designated state forests in the state.

“We could not be more excited to formally designate land to create these new state forests,” Holcomb said during the announcement on Friday. “There’s no better way for Hoosiers to get out and get some fresh Indiana air than by exploring our state parks, recreation areas, fish and wildlife areas and our 158,000 acres of public state forests.”

Dan Bortner, director of the Indiana Department of Natural Resources, said this is the first time in 67 years that the state has created new state forests.

“As with all our properties, we know Hoosiers and our guests will be able to find solace and inspiration in these woods for generations to come,” Bortner said.

The new state forests also serve as two locations for Holcomb’s Million Trees program, which is an initiative to plant 1 million trees in Indiana by 2025.

Foresters have been working to plant more than 16,000 new trees at Mountain Tea State Forest and 38,000 trees at Ravinia State Forest, said John Seifert, director of the DNR’s Division of Forestry. The plantings are part of a five-year program.