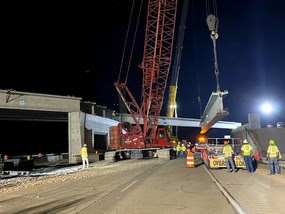 (MARTINSVILLE) – The journey to the I-69 Finish Line started in Martinsville last year with the corridor transforming before our eyes. Beams were set last week on another new bridge being built over State Road 37.

There are ten beams that will support the deck of the bridge. Each of the beams is 140 feet long, longer than any other beams used on I-69 Finish Line.

Many bridges are at a 90-degree angle and perpendicular to the roadway. The Egbert Road bridge is at a skew to connect with Old S.R. 37, requiring longer beams to bridge the angle of the roadway.

Next steps will include building a metal deck, adding reinforcing steel and pouring the concrete deck.

Beams are expected to be installed at the new Perry Road bridge late this month.

They’ll also help safely carry traffic during next year’s closure of a portion of S.R. 37. The new bridges are expected to open to traffic by late fall. I-69 Finish Line is upgrading State Road 37 to interstate standards from Martinsville to Indianapolis.