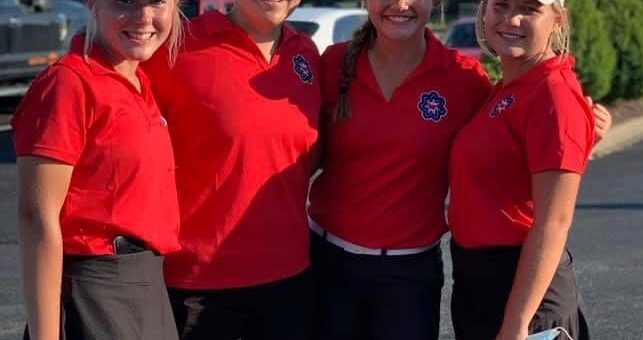 HENRYVILLE – Olivia Sanders shot a season-best 75 as No.19 Bedford North Lawrence finished third in the Providence Invitational at Champions Pointe on Saturday afternoon.

The Stars fired a team total of 339. No.2 Evansville North carded a spectacular total of 9-under 271 to win the event by 44 strokes as No.10 Floyd Central was second in the 13-team field.

Sanders posted three birdies (the course was shortened to par-70, two shots off its normal setup), taming the third, fourth and 12th holes. She shot an even-par 37 on the front nine and faltered with a double-bogey on 14.

“I hit everything pretty smooth,” Sanders said. “I didn’t rush my swing, and that helped a lot. I just wanted to play the best I can.”

“That’s not a glamorous number,” BNL coach Aaron Sanders said of the team conclusion. “We haven’t put it all together yet. Olivia had a good day, but the others struggled a little bit. We’re not doing anything consistently, but I didn’t see many bad shots. I saw smart play. We just want to get it put together by the end of the season.”

The Huskies, who tore up the course and lapped the field without top player Faith Johnson, were paced by Chloe Johnson, who was medalist with a phenomenal round of 6-under 64.

The Stars will visit New Albany on Monday.