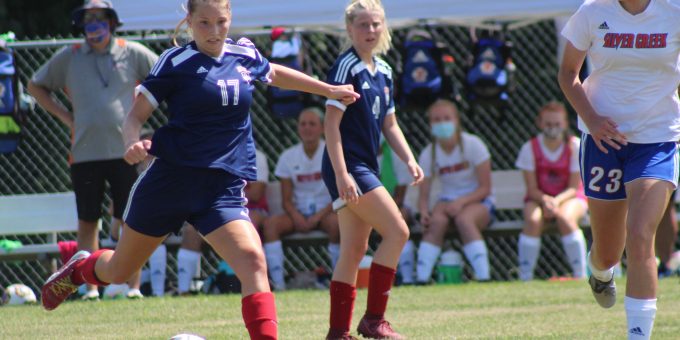 The Dragons scored four times during the final 17 minutes of the first half on their way to a 5-0 victory over the Stars in the season opener on Saturday. The dynamic combination of seniors Anna Wright and Natalie Day provided all the offense as Silver Creek – finally at full strength after a season of injuries and absences a year ago – flexed its firepower.

Wright, a Western Kentucky recruit, recorded a hat trick while Day rang the bell twice. Wright missed the entire 2019 season with an ACL knee injury, and Day was limited to 10 games. They were missed. BNL, while wishing them no ill will, probably wished they had stayed home this time.

The Stars were equal to the test until conditioning became a factor. That’s when Day broke away for the first score at 17:00. From that point, the Dragons were superior.

“I thought we looked great, then the dam kind of broke open,” BNL coach D.J. West said. “Conditioning is a factor for us. In the first half, they were in better shape and ran some circles around us. But in the second half we toughened up a little bit.”

“When they’re on, they’re a pretty good tandem,” SC coach Patrick Anderson said. “We’re just trying to figure out where to put them on the field. Once we did that, we opened up some stuff. Then it was more like we expected.

“We didn’t know if it was a conditioning thing, but we were able to break them down a little bit and they got a little tired.”

BNL generated a few threats against Creek goalie Megan Ekart (who was the victim of an assault during a softball tournament in Georgia in 2019 as a rock was thrown over a hotel fence. It struck her in the head as she was swimming). She denied chances by Heidi Dufore (early in the first half) and Aly Baer (a sprawling save with 13:35 left) that represented BNL’s best shots.

“We played a pretty decent second half, we created a few opportunities,” West said.

BNL (0-1) will return to action on Monday at Bloomington North. Tickets will not be available at the gate. Anyone wishing to attend must purchase tickets in the BNL athletic office.