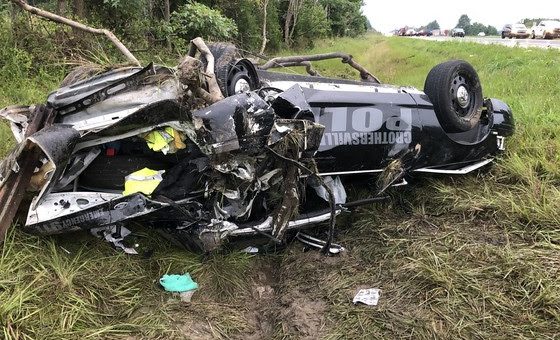 (CROTHERSVILLE) – Friday morning, Indiana State Police responded to a two vehicle crash on I-65 in Jackson County that resulted in a Crothersville Police Officer being sent to an Indianapolis hospital with serious injuries.

An investigation by the Indiana State Police-Versailles Crash Investigation Response Team indicated two Crothersville Police Officers were providing traffic control for a highway maintenance crew that was working on I-65.

Shortly before 6:00 a.m., the two officers had pulled onto I-65 Northbound near the 44-mile marker.  The police vehicles were blocking both northbound lanes of I-65 with their emergency lights activated.

Officer Michael A. Weiler, 45, a five year veteran of the Crothersville Police Department, was in the right lane in a fully marked 2007 Ford Crown Victoria.  A 2020 International truck pulling a trailer, being driven by 37-year-old Harvest L. Beacham, of Indianapolis, was traveling in the right lane of I-65 Northbound approaching the police vehicles.

Beacham’s semi collided with the rear of Officer Weiler’s vehicle.  Weiler’s vehicle was pushed off the east side of the roadway where it overturned, coming to rest on its top.

Beacham’s vehicle entered the median where it collided with the cable barrier before coming to a stop.

Officer Weiler, who suffered serious injuries, had to be freed from the wreckage and was then flown from the scene to St. Vincent Hospital in Indianapolis.

Beacham was not injured in the crash.

State Police say alcohol and drugs are not believed to be factors although toxicology results are pending.

The Town of Crothersville will hold a prayer circle tonight at 8:00 p.m. at the Crothersville Police Department. The public is invited to attend.