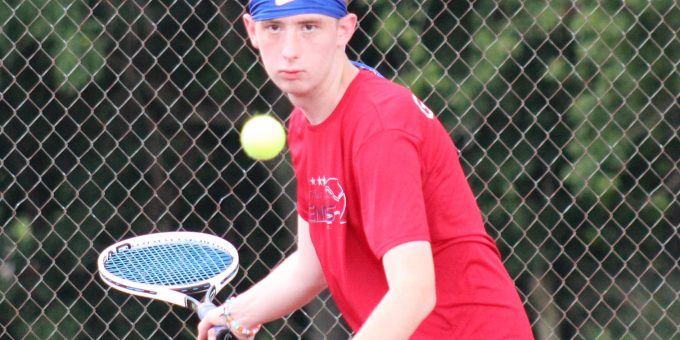 BEDFORD – Many times during his 14 seasons as head coach, Bedford North Lawrence’s Donnie Thomas has written in a preseason projected lineup and come up a spot or two short. Filling seven positions with talent and experience would get tricky as the pencil lead got short and dull.

That problem, thanks to a veteran returning cast and some athletes who have returned to the sport after a lengthy absence, does not exist in 2020. The Stars are sharp, ready to ink success and possibly erase records.

Unless the virus or rain washes out too many matches, BNL believes it has assembled the firepower to chase the school mark for wins in a season (17).

“It seems like we’ve always said we were one guy short, or two guys short. I don’t feel that this year,” Thomas said. “I think we’re pretty good right now. If we get to play, we’ll be real good by the end of the year. I’ve got several kids who have been playing a lot.”

The Thomas optimism starts with singles. Adam Tlustek, Steven Graham and Graham Turner have solidified each spot and could be interchangeable from 1-3 as they compete for a higher court number.

Then switch to doubles. Konley Woodward and Cameron Gratzer have bonded into a formidable duo. Both have experience in doubles, but they were teamed with other partners last season. It took them about three days of practicing to click.

“We’re starting to play really well together,” Woodward said. “We’re beginning to become really good friends, which also helps. And he’s a lot better player than I am.”

Woodward is the aggressor of the tandem, but Gratzer could be the smoothest, most accomplished player on the roster.

“Cameron is the best doubles we have,” Thomas said. “He would be good in singles, but he’s too good of a weapon, and Konley’s forehand and backhand are much better. They make a pretty good pair.”

That leaves the No.2 doubles vacant, and junior Caleb Jones (who has not played since middle school) has stepped forward to claim one of those spots. The other could likely be basketball standout Jackson Miracle, a senior who also gave up the game before high school. Woodward, who sat out two seasons before realizing his error, recruited him over a summer game of ping-pong.

“I see this playing out really well,” Woodward said. “We have a really solid team. We can all do different things. Adam and I are hoping to provide that senior leadership. We’re all working hard in practice, running and playing like we’re supposed to.”

While other sports are facing virus issues and safety concerns, tennis isn’t one of those. Competitors are already social distancing on opposite sides of the net, and doubles teammates are usually at least 6 feet apart to cover the court. The IHSAA has recommended hand sanitizer during changeovers and avoiding the exchange of tennis balls when one gets loose and strays to another court.

The Stars will open the regular season on Monday, hosting Barr-Reeve.