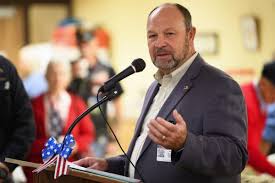 (HOBART) – Indiana Republican Party Chairman Kyle Hupfer welcomed Hobart Mayor Brian Snedecor to the GOP today. Mayor Snedecor’s dissatisfaction with the direction of national Democrats led to his announcement last night. Snedecor brings the statewide Republican mayoral count to 71, the most mayor offices the party has held at one time in state history.

“We’re thrilled to welcome Mayor Snedecor to our party,” said Hupfer. “The Republican tent continues to grow and we couldn’t be more excited to have Brian’s leadership, experience, and commitment to his city and to his constituents on our team. Brian finds a welcome home in the Indiana Republican Party.”

“I must be true to my God, my family, myself, and those that have supported and believed in me. So today I am formally announcing that I am leaving the Democratic Party and that I am joining the Republican party,” Snedecor said.

Mayor Snedecor cited the radical leftward shift of the Democrat Party as a catalyst for switching parties.

“The efforts of the progressive left have driven many people, moderates, and conservatives, away from the Democratic Party,” Snedecor added.

Mayor Snedecor has served as Hobart’s mayor since 2007. He was re-elected to his fourth consecutive term in 2019. Prior to becoming mayor, Snedecor served for 27 years on Hobart’s police force, including a four-year stint as police chief.