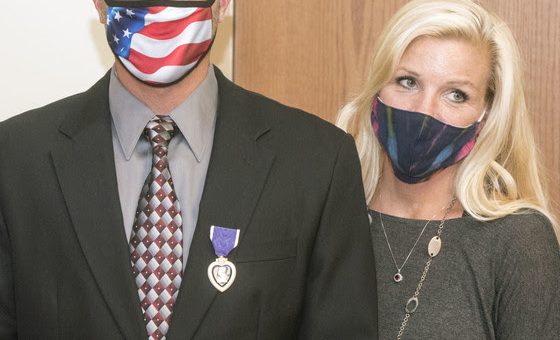 (LAGRANGE) – In case you missed this heart-warming story, Correctional Officer Cory Schreiber, who works at the Indiana Department of Correction (IDOC) Chain O’Lakes Correctional Facility, was awarded the Purple Heart on August 10.  The surprise presentation was held at American Legion Post 215 in LaGrange, Ind.  The Purple Heart was presented to Cory by Congressman Jim Banks, the representative for Indiana’s 3rd congressional district.

Cory and other soldiers were injured in September of 2006 when an improvised explosive device exploded under the Bradley Fighting Vehicle they were riding in while deployed in Hit, Iraq.

“The Department of Correction family is very proud of Officer Schreiber and grateful that he received the recognition he deserves.” said IDOC Commissioner Rob Carter.  “I want to also personally thank Congressman Jim Banks for his perseverance in helping make this happen.”