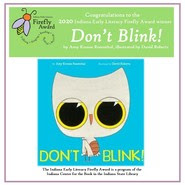 (INDIANAPOLIS) – On Monday, Indiana Center for the Book director Suzanne Walker announced that author Amy Krouse Rosenthal and illustrator David Roberts are the 2020 Indiana Early Literacy Firefly Award winners for their book “Don’t Blink.” The award is being given posthumously to Rosenthal who died in 2017.

Upon receiving the news, Roberts said of the award that it’s a “wonderful tribute to Amy’s genius imagination!” Roberts continued on to say, “A book with no story! And no characters? Being asked to illustrate ‘Don’t Blink’ was an enticing challenge I could not refuse. Amy had very cleverly written a book that required interaction with the reader. I instantly saw the reader as a beloved stuffed toy, and an owl was the obvious choice for a book that offers the opportunity to stay awake all night!”

This is the sixth year of the Indiana Early Literacy Firefly Award. This year, during the midst of the COVID-19 pandemic, votes were submitted from 47 Indiana counties and over 600 children ages 0-5 voted. “Don’t Blink” garnered over 32% of the vote. Votes were collected at public libraries, as well as at daycares and via remote voting form.

The Indiana Early Literacy Firefly Award is an initiative of the ICB to promote early childhood literacy in Indiana. The nominees are chosen by the Indiana Early Literacy Firefly Committee. The nominated books are chosen for their ability to encourage parents and children to use the Every Child Ready to Read® practices of talking, singing, reading, writing and playing together. Caregivers can use the Firefly books as a quality go-to resource for having fun and learning with their young children.

Nominations are currently being accepted for the 2020-21 award. See more details here.