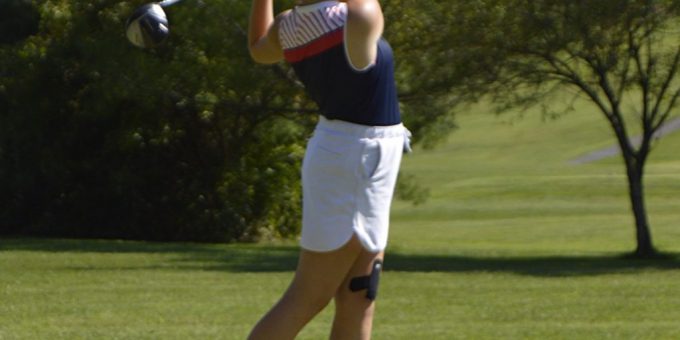 FRENCH LICK – With Kennedy Blair posting a career-best number on the lower end of the lineup, No.18 Bedford North Lawrence fired a solid 163 on the Valley Links during girls high school golf action on Tuesday.

The Stars conquered Corydon (213) and Springs Valley (218) in the three-team meet.

“I actually wasn’t paying much attention to my score,” she said. “I knew I was playing well. Then I looked down and glimpsed at my card and figured out it was a lot better than I realized. Then it was ‘Oh wow.’

“I was just focusing on keeping the ball in front of me and not getting into trouble.”

Addyson Bailey carded birdies on the first and eighth holes en route to a 40, while Olivia Sanders and freshman Chloe McFaddin capped the BNL scoring with 42. Blair’s round was still the story of the day.

“Really proud of Kennedy,” said BNL coach Aaron Sanders, back with the team after recovering from illness. “She did a great job of keeping the ball in front of her and made some putts.

“We just need to get our top three going. Body language wasn’t real good with a couple of them, and that, in my opinion, had an effect on their score. Chloe had 8 really good holes and looks comfortable out there. She just has to eliminate the big number.”

Paige Richardson paced the Panthers with 46, while Kyla Tarr led the Blackhawks with 49.

The Stars will return to action on Thursday at Washington.