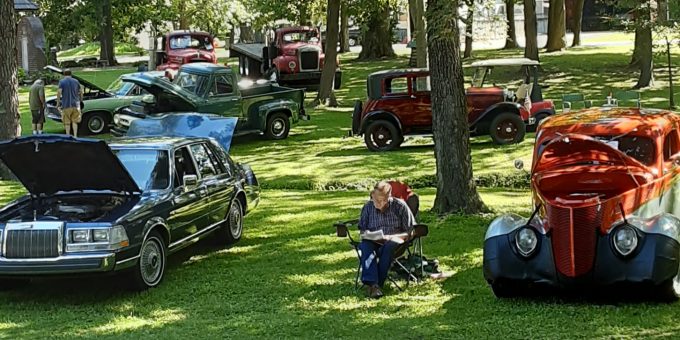 (ODON) – The sun was bright, the skies wear clear and the temperature was just right to close out the 135th annual Old Settlers Day in Odon on Saturday.

The car show brought several entries throughout the morning on Saturday. Many of those who entered have participated for several years while for others this was their first time.

“You got to have a passion for it, or this would be no fun,” said George Borst of Washington, Indiana. Borst did a nut and bolt restoration on his 1961 Corvette which stays in the garage most of the time.

“The original motor had a 283 in it, but was changed to a 350 engine. The restoration itself took about a year to complete, with a few frustrations along the way,” said Borst.

Wyatt Brown, of Fayetteville, entered his Torino station wagon in the car show. “I first worked on the engine and got it running, then started working on fixing up the interior,” said Brown.

Coming back after more than 50 years to the Odon Park was Rick Thompson, of Linton. Thompson brought a 1937 Chevy Truck to the car show.

“I enter as many as these car shows as I can since I have retired from Crane as a boilerman,” said Thompson. “I have been retired for six years and this gives me something to do,” said Thompson.

The coveted trophy from the car show is the “Best In Show” category, but participants could also win from other categories which include:

All participants say they enjoy working on a challenge and seeing their project to completion. Many throughout the area came to see the end of the work product and reminisce and wax nostalgic about these old cars that once traveled the streets of yesteryear.