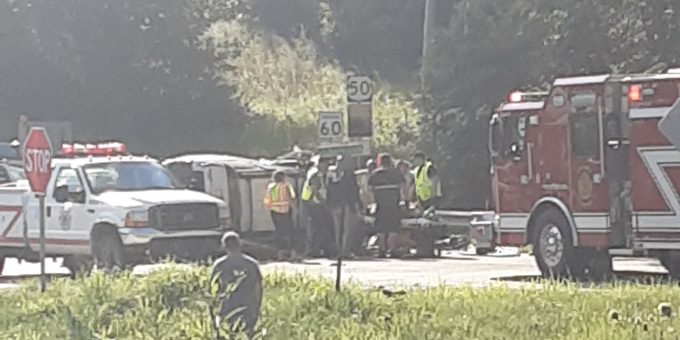 According to a Lawrence County Sheriff’s Department report, 34-year-old Erica Boone, of Salem, was traveling west on State Road 60 West in a 2004 Chevrolet Trailblazer.

At the same time, 36-year-old Shayne Carlisle, of Carlinville, Illinois, was traveling east on US 50 West approaching the Y intersection.

Police say Boone pulled directly in front of Carlisle’s 2017 Hyundai Accent. Police say Carlisle was unable to stop and collided into the driver’s door of Boone’s vehicle. This caused the vehicle to roll onto the passenger side.

Boone and her passenger, 45-year-old Melissa Speckman, of Salem, both complained of hip, leg and stomach pain and were treated on the scene by paramedics with Seals Ambulance and were then flow by an Air-Evac helicopter to the University of Louisville Hospital.

Boone told police her brakes failed and that is why she didn’t stop at the stop sign. However, police tested the brakes on Boone’s vehicle several times and found brakes were working.

Carlisle complained of hip pain and was treated at the scene but refused to be transported to the hospital for treatment.

Police did ask Carlisle to go to IU Health Hospital for a blood-alcohol test which he consented to do. Those tests are pending.