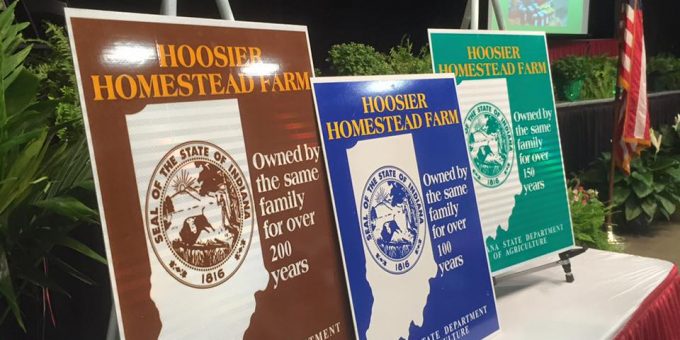 (STATEHOUSE) – Area legislators recently announced the latest recipients of the Hoosier Homestead Award, which recognizes farms owned and maintained by the same family for 100 years or more.

The Hoosier Homestead Award Program honors families who have made significant contributions to Indiana agriculture. Instituted in 1976, the program recognizes the impact these family farms have made on the economic, cultural and social advancements of Indiana. In the past 40 years, more than 5,800 farms have received the honor.

“Congratulations to the families in Senate District 44, and throughout Indiana, on such a great achievement,” Koch said. “Family-owned farms have been the lifeblood of our state since its founding and continue to contribute significantly each year to Indiana’s economy.”

“Families like these demonstrate Indiana’s hardworking heritage,” Lauer said. “We owe a great deal to those who feed us, and quite honestly, the world. Farmers touch nearly every aspect of our lives, and it’s important to acknowledge how much we need and appreciate them.”

“Since the beginnings of our state, our farm families have been the building blocks of our economy,” Lucas said. “These farms continue displaying strength in their work, dedication to their land and the ability to adapt to change.”

“It continues to amaze me every year how many family farms are recognized for at least a hundred years of commitment to our great state,” May said. “The Hoosier Homestead program is a reminder of the hard work and rich agricultural heritage that still defines Indiana.”

To be named a Hoosier Homestead, farms must be owned by the same family for at least 100 consecutive years and consist of more than 20 acres or produce more than $1,000 of agricultural products per year. The award distinctions are Centennial, Sesquicentennial and Bicentennial – for 100, 150 and 200 years, respectively.

To learn more about the program or to apply for a Hoosier Homestead Award, visit www.in.gov/isda/2337.htm. Once made available, photos of the event can be found here.