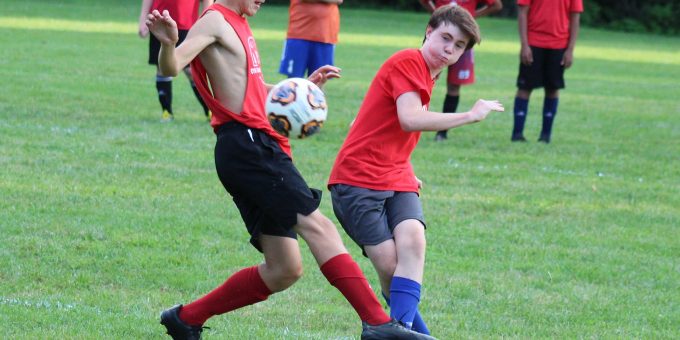 BEDFORD – Soccer, known universally as the ‘beautiful game’ in futbol circles, has been deemed a “contact” sport during this virus era and earned a “dangerous” label.

Who knew? Bruised shins, concussions and sprained ankles – and the occasional knee injury – got an upgrade and earned some unexpected street cred. Or in soccer’s case, when some are accused of feigning injuries during mysterious collisions to earn an official’s whistle, some grass cred.

The real danger right now is the possible loss of the fall sports season itself. That potential hangs over everything, even as Bedford North Lawrence started official practice sessions this week. The Stars just got a kick out of being together and starting work.

“Early on, that’s what a lot of the kids were wondering. Were we going to have a season?” BNL coach Logan Jackson said. “Are we still on? We can’t worry about that. We do the best we can and hope for the best. We’ve made it this far, so hopefully we can see it through.”

With all the health and safety protocols in place, BNL has done what has been asked. Coaches in masks, social distancing when possible. But there’s also skills to be practiced, preparations to be made. And the Stars have the potential for a solid season. They will be dangerous in another, better way.

So shift the conversation from coronavirus to the game. While replacing four starters from last year’s 8-7-2 squad, with a young squad that includes only three seniors, the Stars have skills in key areas. They have offensive threats with senior Lakota Terrell, Danny Cline and Josh Anderson. If they can solidify the defense after the gradation loss of All-HHC defender Seth Sherfick, they could improve the record and challenge the Class 3A sectional powers.

“It will take a little time to get some experience,” Jackson said. “If we can step up and finish how we did last year, build on that, we’re a year older. We should be, from back to front, pretty solid.

“Overall, we’re in pretty good shape. We have to have some guys step up into new roles, change some things a little bit, but we have guys to fill those roles. I’m sure it will take a few games to figure out some pieces, but we feel good about it. We have more depth than what we had.”

One of the keys will be leadership, with Terrell and fellow senior Evan Voris (honorable mention HHC last year) expected to take that role.

“It will be important,” Terrell said. “We need to talk more. We have to set the example. We have a bunch of young and new faces.”

BNL, seeing its first action since the heartbreaking 2-1 loss to Terre Haute South in the sectional last season, when two late goals eliminated the Stars, took advantage of the July workout period allowed by the IHSAA to get a head start on 2020.

“I was ecstatic, with how many kids we had out,” Jackson said. “We had good numbers, and they’ve been really happy to be out there, really motivated. In a way, it’s actually helped. We lost 2-3 months of conditioning, but we had some of our best workouts in July.”

Now the countdown has started toward the season opener on Aug. 18 against Scottsburg. That’s with the understanding and heavy assumption that all goes well – in terms of virus numbers and nervousness – in the next two weeks.

“I try not to think about it,” Terrell said. “There’s always that ‘if’ and possibility we might not have our senior season. It worries me a bit. We just want to play through it.”