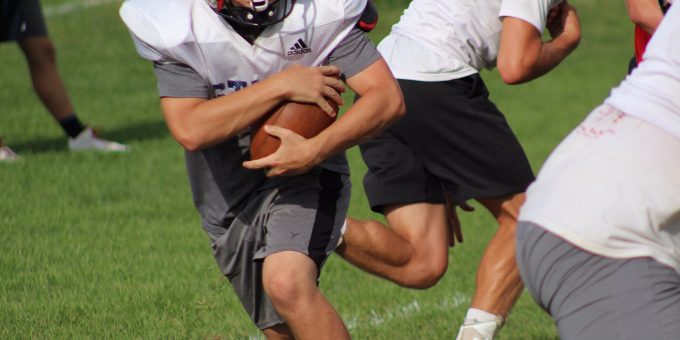 BEDFORD – After months of being told to distance themselves, to avoid touching their own faces, to refrain from sharing unprotected air space, Bedford North Lawrence football shifted into contact mode on Wednesday afternoon.

Helmets (the kind with face masks that keep huge foreign objects from making unauthorized connections, rather than the annoying mandated ones for much smaller particles) and shoulder pads were added to the few required apparel list, allowed by the IHSAA as the countdown toward the season opener took another uncertain step.

For the Stars, this meant a license to crash into somebody, to feel the blast of the clash, to play football. The intensity level and excitement meter rose accordingly.

“It’s getting back in the flow of things,” senior lineman Austin Messmore said. “That means a lot. Every day the intensity level goes up. We’ve been off for fourth months. Everyone is excited to get back. I’m trying to fly around and have fun.

“It was kind of a fun feeling, to rough some people up. We needed that.”

“They were firing off,” BNL coach Steve Weber said. “It’s kind of the other way. They don’t know how to tone it down.”

It’s like turning loose a stallion in a pasture after he’s been cooped in a stable. There’s some running, bucking, celebrating freedom. BNL must still adhere to the current rules and protocols for protection and interaction in this virus time, but there was no doubt of the joy expressed.

And the Stars need a lot of that. They missed so much valuable summer work, even when the IHSAA allowed July sessions. The idle months, while the same for all teams, might have hurt them more than most. Youth and inexperience will be a trademark. They are learning on the fly. And the virus will not be accepted as an excuse.

“We’ve questioned their manhood a few times. They responded in the right way. We have to get tougher, and that’s going to happen. We’re going to challenge them, put them in positions where they’re uncomfortable, make them have to choose to be a football player. Right now they’re responding well.”

That set up the tone of the next two weeks. Right now, the next step in the progression is the IHSAA scrimmage with Mitchell, originally set for Aug. 14. If that happens, if the opener with Martinsville on Aug. 21 transpires, if anything after that takes place, it’s still a guessing game.

The Stars aren’t guessing. In their minds, it’s on. That’s the way they have to view it.

“I think we’re all set on having a season,” senior Ben Cosner said. “We have the mindset it’s going to happen, so we’re working toward that.

“We don’t even know if some of us are going to school or not. It’s a big deal. We have to play like we’re having a season, but it’s kind of hard. It brings us down that it may not happen.”

The memories of the lost spring seasons are still fresh.

“We have to deal with it,” Messmore said. “Whether we have the scrimmage or not, just keep working and move forward. We have to get better.”

The Stars went 3-7 last season, the first real backward step taken in Weber’s seven seasons with the program. He prescribes toughness as the cure.

“We won’t be a soft team,” he said. “We might not be the best team, the quickest or strongest, but we won’t be soft. They’re competing for the ball, trying to break up passes, things we haven’t seen for a while. They’re a lot more aggressive.”