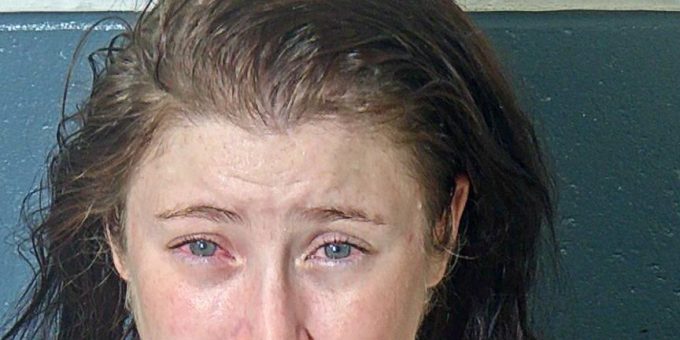 (MITCHELL) – The Mitchell Police Department arrested 23-year-old Felisha Webb, of Mitchell, Monday morning on a warrant charging her with possession of meth, possession of marijuana, and possession of drug paraphernalia and operating a vehicle while never licensed.

According to a probable cause affidavit, on May 22 at approximately 10:43 p.m. a Mitchell Police officer was on patrol when he saw a small maroon car parked at the Mitchell Marathon gas station at the air pump with a woman sitting inside. The officer ran the license plate and the driving status of Felisha Webb.

She was then issued a summons to appear in court on a charge of not having a valid driver’s license.

A K-9 alerted officers to possible drugs in the vehicle. Officers found a small burnt rolled up marijuana cigarette.

Officers also found a cut red straw that tested positive for meth residue inside. The straw was found in Webb’s purse on the front seat.

Webb told police she had not used meth in more than a week.

Also found in the vehicle was a backpack that had a small Altoids can in it with three small baggies and a cut clear plastic straw containing white residue and white residue on the bottom of the can. All tested positive for meth.

Webb told officers she was very sorry and wants help in getting off drugs. She was given information about Centerstone.

Webb then contacted her boyfriend and he came to pick up the vehicle and Webb was released.

Webb’s information was forwarded to the Lawrence County Prosecutor’s Office and a warrant was issued for Webb’s arrest.