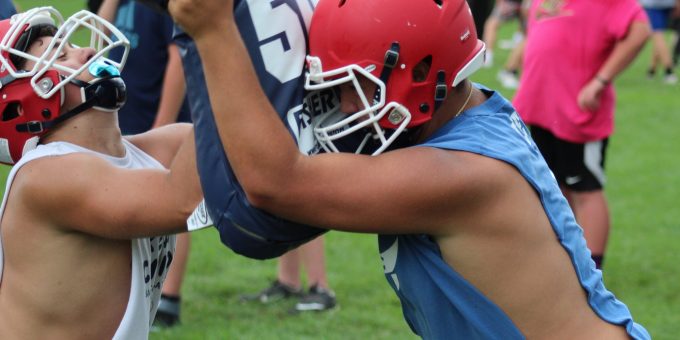 BEDFORD – Bedford North Lawrence got chased off the football field – by thunder and a summer-afternoon downpour – midway through Monday’s first official practice for the 2020 season.

Of course the first day got interrupted. Why would it be any different than the theme of the last five months? Covid Interruptus had chased all sports into hiding. Even this celebrated start of the countdown toward the season opener on Aug. 21 was muted by the constant threat, pall and conversation about the potential danger and obvious annoyance of the virus.

Will the home debut against Martinsville take place? That’s still so far in the future, when everything is reduced to day-to-day, hour-to-hour adjustments and decisions. The only certainty was this day, when football was welcomed back.

The excitement level is still muted. That’s understandable. It’s been a Marvin the Martian sports summer – “Delays, delays, delays.” A lot could go wrong. But for the 65 athletes who reported for Day 1, a lot went right.

“The whole team just wants to play football,” BNL senior James Underwood said. “They’re not thinking about if we’re not going to have a season. When we show up to practice, our mindset is playing football.

“It went well. It started a little rusty. We had to work out the kinks, but by the end it was a pretty good practice.”

Kinks? From a coaching standpoint, after missing so many important months of training and preparation, those holes are craters. There’s not enough duct tape and filler putty to cover it all. “Then you get rain,” BNL coach Steve Weber said with a sigh.

“There’s nothing right about any of this stuff right now. You throw in all the regulations and everything we have to watch for, and on top of that we have a young team. So nothing is on time. Everybody right now is just going one day at a time because you don’t know what’s going to happen. It’s been strange.

“Once we get through the first few days, and everyone sees what will happen and how it will work, we’ll start generating more excitement. Right now, we could get a call tomorrow and say we’re not going to practice. Everyone is thinking about that more than anything else.”

Here’s what should take place. On Wednesday, the IHSAA will allow pads and contact, another step toward normal. Then then Stars are scheduled to scrimmage Mitchell on Aug. 14. One step at a time. Does anyone dare look ahead?

“Because of all the stuff that has happened, it’s kind of hard,” Underwood said. “We’re trying to get there, but we’re behind where we’ve been in previous years because of when we started. So right now we’re trying to get caught up as fast as possible.

“Pads will help a drastic amount. Everyone there wants to put on pads and start hitting each other. Everyone misses that feeling of being a little violent sometimes.”

Football’s form of violence, something other than what we’re witnessing on our major-city streets, would be welcomed. Football is about collisions and cheers, contact and passion. The Stars will need a jolt of that in coming days.

“Since July 6 (when the IHSAA allowed practice sessions to resume), we’ve only had a few days of practice, but the guys have done a good job building off those days,” Weber said. “What little time we’ve had has paid off.

“We have to get tougher. Competing for everything. They just don’t do that right now. It’s up to us, when we do get the pads on, to generate some toughness. That’s the main thing. Compete every rep, don’t go easy on your buddy or just make it through practice. If we don’t get that done, it will be a long season.

“We’ll start getting more contact. By Saturday, the guys will know if they really want to play football or not. Either they step up and play with confidence, or it’s just not for them.”