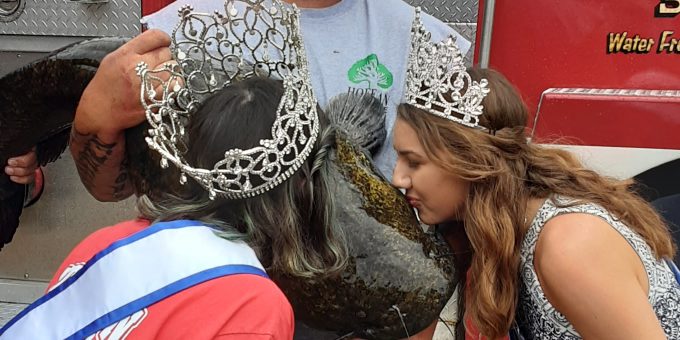 (SHOALS) – The rains kept coming down throughout the day on Saturday but the patriotism and smiles of those attending the 35th Annual Catfish Festival could not be dampened.

There are three things Shoals is well known for: the Jug Rock, the Catfish Festival and the two gypsum production plants located just east of the town.

There were 11 people who entered the Big Catfish Festival and early Saturday morning the anglers were trying their best to reel in the biggest catch.

Drayden Bowling was the first place winner of this year’s Catfish Festival, and all winners stated they will be eating what they caught this weekend. “We do not do this just for sport, but we eat what we catch,” said Bowling.

The tradition of the Catfish Festival Queen giving a smooch to the biggest catch continues to this day, and this year’s queen could be seen adding on layers of lipstick before the Kodak moment.

Last year’s festival queen wanted in on the action too, as she did not get the honor of doing so the year before. She says something came up that prevented her from laying on the kiss, so she gave this year’s lucky fish a big kiss as well.

Due to the inclement weather, the kickball and pickleball tournament will be played out next weekend. The fireworks show will also take place next Saturday.

The other Saturday events went on rain or shine. The 5K Catfish Walk and Run particpants were soaked, but that did not detour their determination to go out and compete.

The parade started up on time, even though they did not have as many entries or spectators as they normally have due to the rain and COVID-19. Despite all of that the patriotism and theme were still in full display.

The Catfish Festival normally is held on July 4th, so the community showed off their Red, White, and Blue with flags lining the streets. Additional flags were handed out during the parade.

The parade was led by the Shoals American Legion Post followed by the Shoals Town Marshal. A variety of floats then moved forward and the Shoals High School played “America The Beautiful” as they made their way around the parade route.

The volleyball tournament was well attended with plenty of spectators willing to watch the spectacle.

One of the bigger events was the cornhole tournament with 24 teams taking part in the action. Later in the afternoon the horsehoe tournament had plenty of participants and spectators alike.

The catfish stand is always a place to stop by to feed an appetite. All through the weekend several places offered an assortment of food including ham and beans on Thursday at the Senior Citizens Building. Local businesses throughout Shoals offered food as well.

Funds from the ride support several community programs such as the reserve deputy program, department K-9 program and the ladies shooting course programs. Find out how you can continue to support these programs throughout the year by calling the Martin County Sheriff’s Department at 812-247-3726.