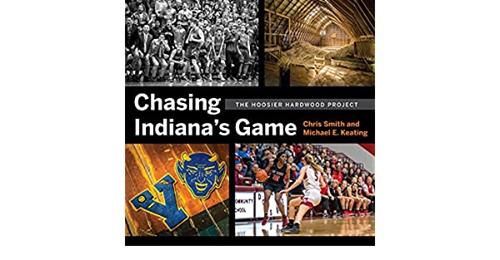 (BLOOMINGTON) – Basketball was not born in Indiana, but the Hoosier state adopted the game more than 125 years ago. Inspired by the storied history of Indiana high school basketball, photographers Chris Smith and Michael E. Keating captured Hoosier Hysteria’s legacy with photographs and essays in “Chasing Indiana’s Game: The Hoosier Hardwood Project,” a new book published by Indiana University Press.

Teaming up with fellow photographer Keating, The Hoosier Hardwood Project was born. As of 2020, Smith and Keating have traveled more than 50,000 miles and shot over 400,000 digital frames of 300 gymnasiums.

The beloved project, currently on display at the Indiana Basketball Hall of Fame and selected as one of the Indiana Historical Society’s Bicentennial Exhibits, is now available within “Chasing Indiana’s Game.”

“As the years go by, one thing remains constant in our state – and that is the shared love of basketball,” said Smith. “This project has shown Michael and I that basketball in Indiana is much more than just a game. With every stop, it became obvious to us that the communities in our state take great pride in their gymnasiums and the tradition of Friday and Saturday night basketball. We were always welcomed with open arms and allowed to explore and document the buildings and people within them. And, we were often led to our next destination by those very people. History and a sense of community live within the walls of these gymnasiums.”

In addition to images ranging from barn courts to some of the nation’s largest high school gymnasiums, the book also features essays by Smith and Keating recounting stories and memories learned along the way from community members and some of Indiana’s most legendary players and coaches. The photography project initially emphasized the architecture of Indiana high school gymnasiums, but as time and travels persisted, Smith and Keating found inspiration in the people that brought the courts and the game to life.

“We traveled to an old gym turned community center in Vernon, Indiana, and arrived while a dance class was taking place on the stage. On the court, a young boy was shooting baskets,” said Keating. “His mother asked if she should stop her son so that we could photograph the gym, and my response was ‘absolutely not’ and that’s when it hit me that this project was not just about the physical spaces it was about the human connection to these gyms and the countless memories that were made in them. Before we knew it, we were sitting on the stage looking through historic team photos and sharing tales of the boy’s grandfather who played on the same court. Legacy and community live in the ideas of Hoosier Hysteria.”

For more information on The Hoosier Hardwood Project, visit hhphotoproject.com.

For more than 35 years Chris Smith has traveled the United States and the Caribbean making images for Fortune 500 companies and editorial outlets like The Wall Street Journal, National Geographic Traveler, and Smithsonian Magazine. He also teaches photography at Northern Kentucky University and in 2013, inspired by a photograph of his father’s 1937 basketball team, began work on the Hoosier Hardwood Photo Project. He lives on a farm in southeastern Indiana with his wife, Elise, not far from their two daughters, Kaitlin and Maggie.

Michael E. Keating is a photojournalist whose career spans five decades. A Perry County, Indiana, native, Keating worked for newspapers in Cannelton, Tell City and Evansville and was named Indiana News Photographer of the Year in 1977. Keating joined the staff of the Cincinnati Enquirer in 1978 where his prize-winning work garnered local, regional and national recognition. Keating won an Emmy for a collection of videos in 2009 and earned another nomination in 2018 for a documentary short on the creation of a sculpture of Pete Rose in a headfirst slide. He is also the author of “Cincinnati Shadow & Light” and currently serves as Co-Trustee of the Clyde N. Day Trust. He lives with his wife, Sarah, in the greater Cincinnati area. They have two grown children.

An academic publisher, Indiana University Press seeks to share scholarly and culturally meaningful books with the world. IU Press produces more than 120 new books annually, in addition to 40 journals, and maintains a backlist of some 3,500 titles. Recognized globally as the leading academic publisher for humanities and social sciences. Founded in 1950, IU Press still continues to share books that matter and will matter in years to come.