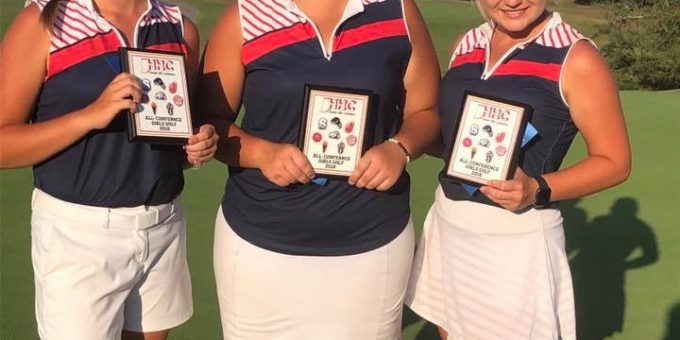 BEDFORD – Without pressure, coal cannot become a diamond. Bedford North Lawrence’s successful golf program, now a sectional and Hoosier Hills Conference dynasty, thrives on the heat of competition and the force of expectations.

With three returning seniors at the top of the lineup, the Stars are set for another sparkling season – provided the haunting, constant specter of COVID-19 doesn’t do more damage to the fall sports campaign.

Last year, without a senior in the lineup, BNL won its seventh straight IHSAA sectional title and fourth consecutive HHC championship. The Stars finished 5th in the regional and failed to secure another trip to the state finals, and that’s been a driving force as BNL prepares for the 2020 opener.

The veterans at the top – state finalist Addyson Bailey, reigning Bedford Junior City winner Olivia Sanders, and Ashley Chase – give the Stars a solid nucleus and building blocks. They have been through the battles, withstood the tension.

“They grew a lot,” BNL coach Aaron Sanders said. “Last year was the first time they had take over and they knew they couldn’t have a bad day. They’ve got that under their belts, they’re seniors now, and I think they’re ready to go out and start pulling people along with them.”

Golf requires four scores for a team total. BNL will have some fierce competition for the starting fivesome, with Kennedy Blair and Samantha Biel back from last season, with freshmen Chloe McFaddin and Kenley Craig poised to make noise.

“I think they have a chance to be one of the best teams we’ve ever had,” Sanders said, and he’s coached some stout units during his tenure. “If we can get some help from the 4-5 spots, those top three are so strong. All three had their moments and played well. If we can get them to be consistently in the 70s, I think we have a chance.

“We want to win the sectional and conference, get back to the state tournament. We’ll bring a lot of experience back.”

That’s a lot of added weight of expectations to load on those shoulders.

“There was a lot of pressure on us, but we handled it pretty well,” Bailey said. “It helped us perform better. We can’t not care anymore, we have to shoot lower scores. It taught me a lot, how to be a leader and encourage people to be our best. If you have a rough day, don’t beat yourself up. Just help the team as much as you can.”

Bailey was the sectional medalist and advanced to the state finals as an individual. After being a part of two teams to qualify for the last stage of the state tournament series in 2017 and ‘18, she wants to cap her career with another journey to the grand stage. She played 10 summer tournaments to get ready.

“It’s been such a motivating factor,” she said. “I would love to finish all four years going to state. My goal is All-State, one of the biggest goals. I have a lot of goals for myself and my team. If everyone pulls their weight, we’ll be pretty decent.”

Sanders, the conference medalist and the coach’s daughter, is prepared for a leadership role.

“Being a senior, people think we’re the best and there’s a lot of pressure going into it,” she said. “Last year was kind of rough. But the younger girls have been working a lot over the summer, which will help us. We feel good about it. We’re confident we can help the team make it as far as we can.”

BNL is dealing with a slight setback as official practice sessions get underway. Coach Sanders was diagnosed with COVID-19, forcing him to miss at least the first 10 days. Olivia has played and practiced by herself as a precaution. Former City champion Kori Johnston will coach the Stars during his absence.

The Stars will open the season in the Bloomington South Invitational at the Country Club on Monday.