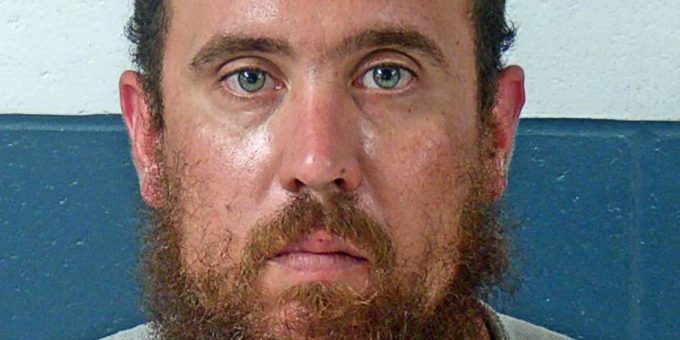 (BEDFORD) – A Freetown man was arrested Thursday afternoon after a warrant was issued for his arrest.

According to a probable cause affidavit, on Sunday, July 26 just after 8 a.m. dispatch received a call from a woman that reported her ex-boyfriend Casey Baughman had just stolen items from her home and had taken off in a dark grey primer colored Chevrolet S-10.

The woman told police Baughman came to the home earlier that morning and pushed a fireplace pipe coming out of one of the front windows of the residence and began yelling into the residence at her saying he would take whatever he wanted.

He then began loading items into his truck. The woman came outside and confronted Baughman saying the times belonged to her. The items included a riding lawnmower, power washer, weed eater and the car keys to a vehicle she had left unlocked.

He attempted to load or move a dirt bike belonging to the woman but dropped it, causing the handlebar to break.

Baughman then grabbed a water hose and began spraying the woman with water. She continued towards him, pleading with him to stop and telling him he could not take her belongings. That is when he began throwing gravel at her and, at some point, picked up a carpet knife and threw it at her. The knife missed hitting the woman but was thrown at such force it was still sticking halfway into the side of the residence when police arrived.

Baughman kicked a push mower, breaking the top plastic cover, before jumping into his truck and fleeing out to the driveway, dragging a pair of loading ramps behind him. Once on the roadway, the ramps fell off and broke into several pieces.

The woman attempted to follow behind Baughman for a short
time while trying to speak with 911 dispatchers. They advised her to not follow behind the vehicle but instead go back to her residence and wait on an officer to arrive.

Upon her return to her residence, Baughman had turned around and stopped at the driveway, where she was parked. He proceeded to yell out his window, cursing and taunting her that he “won’t be arrested” and to “go
ahead call the police.” He then fled the area.

Police attempted to contact Baughman and he agreed to meet them but never showed up. Police then requested a warrant for his arrest.