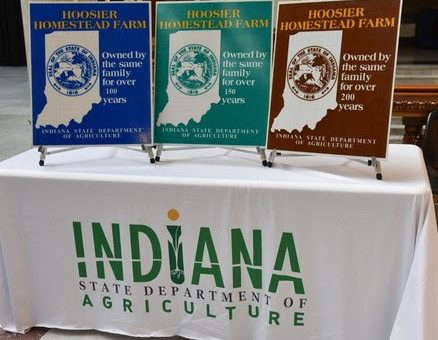 (UNDATED) – More than 150 Hoosier farm families have been awarded the Hoosier Homestead Award in recognition of their commitment to Indiana agriculture by Lt. Governor Suzanne Crouch and Indiana State Department of Agriculture Director Bruce Kettler.

To be named a Hoosier Homestead, the farm must be kept in the same family for at least 100 consecutive years and consist of more than 20 acres or produce more than $1,000 in agricultural products per year.

“Heritage and endurance are two words that come to mind when reflecting on our great state,” Crouch said. “This award captures the essence of Indiana and the many individuals that help ensure Indiana agriculture perseveres.”

Since the program was established in 1976, more than 5,800 families have received the award.

“To keep a family farm working and in the same family for over 100 years is a tremendous feat,” Kettler said. “Agriculture has always been at the core of Indiana and of these individuals. Recognizing our longstanding Hoosier farming families is always an honor.”

Due to the current ongoing pandemic, Lt. Governor Crouch and ISDA Director Kettler were unable to host a traditional Hoosier Homestead Award Ceremony. Individual family ceremonies were held at the Statehouse today and more families are set to be recognized on August 7, all following Governor Holcomb’s ordinances, Indianapolis Mayor Joe Hogsett’s orders and the CDC guidelines.

To find the Hoosier Homestead Award recipients for your county, please click here.

Click here or visit isda.in.gov to learn more about the Hoosier Homestead Award.