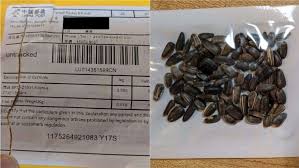 On Monday, the Office of Indiana State Chemist announced that at least two Hoosiers have received packages of seeds from China. The packages are mislabeled as containing “stud earrings” and the shipping labels suggest they were sent from Shenzhen. As of Sunday, agriculture departments in 27 states have issued warnings to residents urging them not to plant or throw away unsolicited packages of seeds.

Officials have expressed concern that the seeds might be intended to introduce invasive species or to spread infectious diseases to American crops. This represents a serious threat to states like Indiana, where agriculture contributes an estimated $31.2 billion to our economy and together with forestry, employs about 188,000 Hoosiers.

According to Whitehouse Ohio’s Police Department, where residents received mysterious packages of seeds, the packages appear to be part of a “brushing scam.” A brushing scam is when a vendor pays an outside company to post a positive review of their product in order to boost its listing. In order to avoid detection by the e-commerce site that hosts it, the vendor ships an inexpensive item to a randomly selected address in the United States. The Wall Street Journal has reported that this sort of scam is popular with Amazon vendors based in China.

While USDA and DHS are well suited to investigate the potentially harmful characteristics of seeds shipped from China, and the parties responsible for violating customs law, the Justice Department could work with e-commerce sites like Amazon to investigate whether or not these packages are part of a brushing scam. That information would either provide Hoosier farmers with valuable peace of mind or spur needed vigilance against a potentially serious threat from the Chinese Communist Party.

At a time of increasing great power competition, it’s crucial that every arm of the federal government vigilantly monitor potential aggression from the Chinese Communist Party. We know for a fact that the Communist Party has spied on and sabotaged U.S. industries ranging from defense manufacturing to pharmaceutical drugs. It’s not farfetched for China to also target our agricultural sector, one of the strongest in the world. I appreciate your consideration of this important matter.