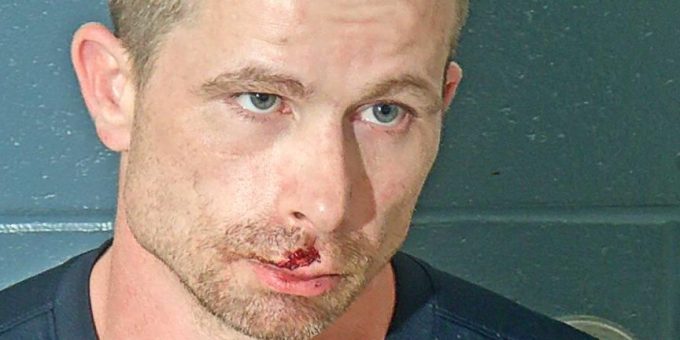 (MITCHELL) – A Mitchell man was arrested Monday night after he allegedly injured a woman during a fight.

Police arrested 39-year-old Terry Lewis on charges of strangulation, battery resulting in bodily injury, and intimidation with a deadly weapon.

According to a probable cause affidavit, on July 27 at 4:07 p.m. Mitchell Police Officer Christian Anderson was called to a home in the 300 block of West Vine Street after a report of a battery.

The woman was wearing an oxygen receptor and having trouble breathing.

The woman was asked numerous times if she needed emergency medical services and she denied treatment.

Another man at the home told police he came inside and saw the woman trying to get Lewis off of her. He yelled at Lewis who then ran and dove through a bedroom window.

The woman told police Lewis was helping her husband fix a lawnmower and she had asked Lewis to borrow his phone. While trying to use the phone she accidentally opened a recent app that showed a photo of a unclothed child who appeared to be around 5 years old.

She then immediately turned off the phone’s screen. At that time Lewis entered the kitchen with a knife in his hand.

Lewis then said, “I know what you did” and forcefully grabbed the phone out of the her hand and then started choking the woman. He then released her, walked over to the kitchen table and threw a chair at her. Following that he proceeded to threaten her with his pocketknife and started punching her.

At that time, the woman’s husband entered the room and Lewis ran into the bedroom and dove out the window.

Police attempted to locate Lewis and found him at his home in the 910 block of West Main Street. Lewis had a small laceration on his upper lip.

Lewis asked the officer if he was going to be arrested. He then stated he was at a friend’s house and went inside to grab his belongings and leave and noticed some items missing. He says the woman attempted to stop him and started punching him in the face while her husband was standing in the doorway armed with a baseball bat preventing him from leaving. Lewis stated while the woman was punching him in the face she was screaming “I’m going to f****** kill you; you are going to f****** die”. He then admitted to pushing the woman away from him and running away and jumping out of a bedroom window.

Lewis was then placed in handcuffs and asked if he needed medical attention. He requested to be taken to a local hospital. He was transported to IU Health Hospital and received four stitches in his upper lip.

Lewis was then transported to jail and charged.