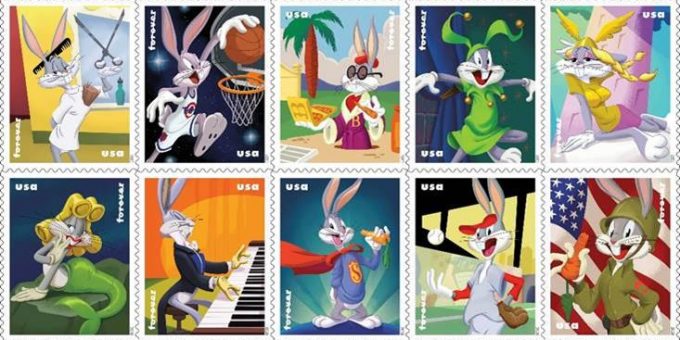 (INDIANAPOLIS) – The U.S. Postal Service issued the Bugs Bunny commemorative Forever stamps Monday, the character’s 80th birthday. The Bugs Bunny stamps were dedicated in a virtual ceremony and are now being sold at Post Office locations nationwide and online at usps.com/bugsbunny80.

“It’s a special privilege to celebrate the 80th anniversary of one of the most popular and iconic characters in history”, said dedicating official Kristin Seaver, chief information officer and executive vice president, U.S. Postal Service. “Bugs is both timeless and timely, a quick-change artist who can get out of a jam, win any battle, through his wits and clever disguises. He simply summons up whatever talent, costume or personality is needed to escape every perilous situation.”

The Bugs Bunny pane of 20 stamps will be issued as Forever stamps, meaning they will always be equal in value to the current First-Class Mail 1‑ounce price. News of the stamps is being shared on social media using the hashtags #BugsBunnyStamps and #BugsBunny80.

Since his debut in the short-subject cartoon “A Wild Hare” in 1940, generations of audiences have cheered Bugs’ gleeful gusto, quick wit and endless clever resourcefulness. To outwit the opposition, he can conjure dynamite, cherry pies and mallets out of thin air; dance like a seasoned hoofer; play piano; and conduct orchestras. He summons up any talent — and any costume — that will help him thwart his relentless foes.

Born of a team of young animators who produced Looney Tunes and Merrie Melodies cartoons for Warner Bros., Bugs’ name came from one of those early cartoonists; “Bugs” and “Bugsy” were trendy nicknames at the time, signifying a crazed or wacky disposition. The catchy alliterative sound of “Bugs Bunny” partnered well with the names of cohorts Porky Pig and Daffy Duck.

Bugs’ very first line, “What’s up, Doc?” — unusual slang blurted out with the accent and wise-guy attitude of a street-smart New Yorker — had audiences howling and became the instant catchphrase of the “wascally wabbit,” as he was called by his first foe, the hapless hunter Elmer Fudd.

With global star power, Bugs Bunny has graced screens of all sizes, from television and movies to phones and tablets. Eighty 11-minute episodes of the new “Looney Tunes Cartoons”reintroduce Bugs Bunny along with other marquee Looney Tunes characters in gag-driven shorts that include classic storylines adapted for present-day audiences. The Oscar-winning rabbit has also been honored with a star on the Hollywood Walk of Fame.

Customers may purchase stamps and other philatelic products through The Postal Store at usps.com/shopstamps, by calling 800-STAMP24 (800-782-6724), by mail through USA Philatelic, or at Post Office locations nationwide.